‘Battle of Clontarf’: history of art and Ireland 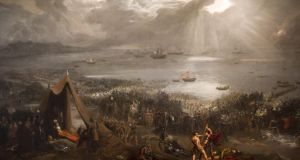 Hugh Frazer’s massive Battle of Clontarf (1826) has been repatriated from Hawaii to Ireland for the millennium commemorations of the battle.

Purchased from a private collector in Ireland 35 years ago, the painting was owned by American philanthropist George Isaac in Hawaii (Isaac’s grandparents were Famine emigrés). Kildare Partners, in association with the Clontarf 2014 committee, have brought the painting home in time for the commemorations of the Battle.

It will be on exhibition at the Casino in Marino in Dublin until April, overlooking the original battlefield of 1,000 years ago. Designed by Sir William Chambers. as a flagship of neo classical taste, the Casino is a fitting venue for this remarkable Irish history painting.

History painting – the most important genre of European painting - was occasionally subverted in Ireland for anti-establishment uses. In 1826, the production of Frazer’s Battle of Clontarf, at the height of Emancipation agitation, was inevitably seen as ideologically inflected.

Notwithstanding the final victory, the deaths of Brian, Murchad and Tairdelbach – potentially three generations of High Kings – resulted in political instability, but following centuries of foreign occupation of Ireland, the multivalent victory at Clontarf lent itself to repurposing in the post-Union period.

Frazer’s painting depicts a stage in the battle when all three were alive, promising the continuation of the line, and the triumph of Gaelic Catholic Ireland. Defeats that lead to bigger victories, and victories that lead to ultimate defeats, lend themselves to fertile myth-making, and are sometimes used as integrating narratives in the building of nations.

Hierarchism privileged history painting above all others. And, like any trained history painter, Frazer did his research. The painting is quasi-informative about aspects of medieval warfare: the hand-to-hand combat, the deployment and battle lines. But other aspects, such as the arms and armour, and the topography of the battlefield, were unknowable 800 years later. Frazer’s Clontarf is, however, a blend of genres, also influenced by panorama painting, much in vogue at the time. By eliminating the central focal point on which history painting was constructed, the eye of the viewer was drawn to the peripheral corners of the picture plane, creating a dramatic unfolding of the narrative.

The elaborate preparation, the war chants and ritualised manoeuvres meant that battles were highly orchestrated events. All this is suggested in the painting. However, the inclusion of so many figures, and such a complex narrative, challenged Frazer’s technical abilities. And so the sun, breaking through the storm clouds, is a device that functions aesthetically, but also obliterates parts of the field and allows Frazer to gloss over difficult details. The dichotomous handling, however, conveys the impresion of unlimited action, of a battle that had infinite ideological possibilities.

We can determine the moment Frazer enters the fray, so to speak. The on-on-one combat on the right shows Murchad taking on Jarl Siguror of Orkney, and killing him. Shortly after, Murchad lost his own life. The physique of the semi-nude combatant enabled Frazer to display his classical training, and embodies in Murchad civic virtue and valour.

Frazer’s Clontarf asserted Ireland’s superior civilization: Gaelic versus Viking, and Christian versus heathen. And its appearance in 1826 was, in effect, a declaration that the time had come to address the destiny of the nation. Galvanising historical images that inspired action were seen as rallying calls in the present, and many recognized the need to create images of hope and incitement. Indeed, 16 years later, Clontarf was designated for the failed Monster Meeting, banned by authorities who were more than cognisant of the significance of the site. Given its size, scale and treatment, this was no innocent image, then, but a re-positioning one, designed to press powerful memories into contemporary political use.

The Battle of Clontarf by Hugh Frazer (.1813-61) will be on display at the Casino, Cherrymount Crescent, off the Malahide Road, Marino, Dublin 3 until April 24th

Don McLean: ‘My ex-wife is the worst person I ever knew’’