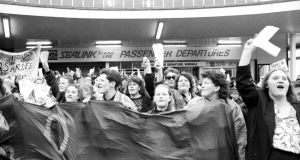 Image from Rose Comiskey’s Against the Tide PhotoIreland Festival exhibition: Outside the ferry terminal in Dún Laoghaire. 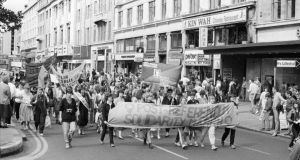 Image from Rose Comiskey’s Against the Tide PhotoIreland Festival exhibition: a march on O’Connell Street 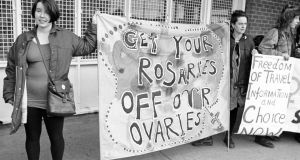 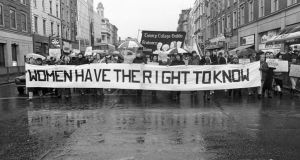 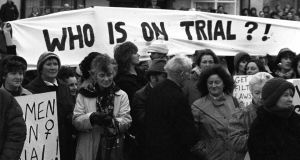 Image from Rose Comiskey’s Against the Tide PhotoIreland Festival exhibition: a protest in Kerry

The Against the Tide exhibition by former activist and photographer Rose Comiskey is a series of 30 black-and-white images of women’s protests mainly in Dublin city but also in Dún Laoghaire, Waterford and Tralee.

One image, from 1985, shows women marching through Westmoreland Street, towards O’Connell Bridge in Dublin, a line at the front bearing a street-wide banner saying “Women Have the Right to Know”.

“It was a march organised to demand the right to information about abortion services in England,” says Ms Comiskey. “It was a time when even English magazines like Cosmopolitan were banned because they had ads for abortion clinics in them.”

In another a woman is carrying a placard with the phone number 01-679 4700 on it, the number, she adds, of the Women’s Information Network, which was based in a small room in Temple Bar.

Ms Comiskey took the phones herself at times during the 1980s. “We weren’t counsellors or anything but women were coming to us just desperate for information . . . It was illegal but no one ever came after us.”

The exhibition, part of the PhotoIreland Festival, runs until August 2nd at the Avenue Road Gallery, Portobello, Dublin.