‘Magnetism’ rises to the challenge of its venue’s scale; and Anna Macleod’s polite protests hit home 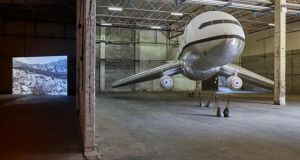 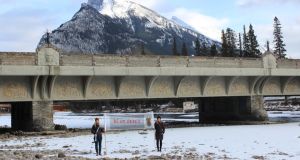 Detail from OH Alberta: Bewildered in Banff by Anna Macleod

While I’m standing on a high mezzanine platform at Magnetism, looking down on vast installations by Siobhán Hapaska and Lucy Andrews, a smiling visitor joins me. Nodding towards the large space, he says: “Where would you find a venue like this? The Turbine Hall at Tate Modern? This is a national event, not just a Sligo event.”

He turns out to be Gavin Freeborn, a photographer and artist from Rossnowlagh, Co Donegal, but based in London. He’s impressed not just by Hazelwood, but by the Model Arts Centre, where Psychic Lighthouse, the thematic WB Yeats exhibition, has just concluded.

Hapaska’s Downfall consists of 11 olive trees suspended horizontally in a network of packing straps under tension. A motor hums and the trees vibrate. In Greek mythology, we are told, the olive tree symbolises the birth of western civilisation, but Hapaska infuses it with unease and foreboding. Her installation would be entirely at home in the Turbine Hall, as would Andrews’s giant pillar composed of unspooled videotape. She found the tape on site. Magnetism occupies part of a complex of industrial buildings dating from 1969.

Hapaska rises to the challenge of the venue’s scale, as do all the exhibiting artists, but the star is the location.

The interiors of the box-like buildings, which appear sturdy and seem in surprisingly good shape, have a grandeur that transcends their utilitarian nature. The complex, set in woodland on Lough Gill – Yeats country – dwarfs the adjacent Hazelwood House, a Palladian mansion in a state of some disrepair.

Since its first excursion in 2003, Aleksandra Mir’s Plane Landing, an enormous aircraft in the form of a helium balloon, might more usually be found at outside locations, but the buildings at Hazelwood could easily accommodate more than one aircraft in its hangar-like interiors. So Mir’s plane, in a state of perpetually landing, is comfortably ensconced. And where else could Garrett Phelan put a full-height motorway lamp indoors? He pairs it with a lightning rod, once used on the site, to create an environment with a theatrical feeling, much more Beckett than Yeats.

Australian Mikala Dwyer thinks big and makes a kind of room within a room. Square Cloud Compound is a schematic representation of an enclosed world, a realm of “hope and despair, protection and punishment”. Panels of coloured fabric, bird boxes, “ornaments, lights, plants, mirrors and charms” are pressed into service. The compound, though, comes across as cluttered, and a necessary bravura doesn’t quite materialise.

Laura Morrison, better known for works that hinge on human-human interactions, nods to the woodland setting with a series of mammoth, mixed-media paintings, “oversized head-shots or calling cards of local trees”. They are made with great panache. Presumably the contrast between their epic scale and the modest notion of the calling card or the photo-booth head-shot appealed to her. Continuing the gargantuan theme, Igor Grubic’s film Monument considers the “lives” of anti-fascist monuments in Croatia, which came under sustained attack in the 1990s.

You may wonder if it occurred to anyone to deal with the scale of the space not by competing with it but by doing the opposite. Andrews does just that with her second piece, Floating and Sinking, which features a glass of water – half-empty or half-full, depending on your view – floating in an aquarium. It’s so effective that it suggests other interesting possibilities, involving smaller, concentrated works, for future exhibitions at Hazelwood.

It would be great if that were to happen. Magnetism is a brave, imaginative initiative. Its curator, Vaari Claffey, is the sister of one of Hazelwood’s owners, Sue Raethorne. She and her husband, David, have said that future exhibitions are part of the grand plan. A proposed whiskey distillery will occupy only part of the industrial buildings. The demesne, marked for residential redevelopment, was saved by the economic collapse and now has the possibility of an alternative future.

Water Conversations is a compendium of several projects by Anna Macleod going back to 2007. It’s hard to describe and almost impossible to pin down, which, given that water is the linking factor, is probably appropriate. Macleod is engaged by our relationship, or relationships, with water, from place to place and with regard to radically different values and imperatives.

Her Canada, Alberta and OH Alberta: Bewildered in Banff conversations, for example, take the form of, respectively, a filmed walk she made (David Bickerstaff on camera), with a sculptural prop in an umbrella shape, on a lake in Banff National Park, and photographs of another walk, with an embroidered banner, through the town of Banff. Underlying her simple actions lie complex historical and environmental issues.

We may think of Canada’s beautiful wilderness, she points out, but, to take an example, indigenous peoples were removed from their summer hunting grounds in the Bow River Valley to create a “wilderness” and a tourist route to Banff hot springs. Meanwhile, climate change probably contributed to the 2013 flooding that drove Nakoda people from the reservation homes to which they had been relocated. Contributing to that climate change, radical means of fossil fuel extraction are affecting water systems in unknown ways.

Such situations are echoed in various other conversations from Colorado in the USA, India, Mongolia and Ireland. Macleod is an extraordinarily well-mannered protester – the banner she displays in Banff is embroidered, and it reads simply: “Bewildered” – but she is a protester rather than a mere observer. One feels her deep dismay. The many beautiful objects and images in her show may not amount to an antidote for Earth’s ills, but they appeal to reason and have a persuasively therapeutic character.

Netflix: 10 of the best new shows and films to watch in October
Real news has value SUBSCRIBE