Henri Fantin-Latour: ‘The painter of silence’ 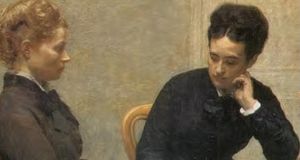 In a century when most artists either sought the approval of the established Salon exhibition jury or rebelled and joined the avant-garde, Henri Fantin-Latour (1836-1904) stubbornly followed his own instincts.

“Fantin’s career encompassed the artistic agitation of the 19th century; the end of Romanticism, the affirmation of Realism, Naturalism and Symbolism, all the while retaining a very strong consciousness of Classical tradition,” says Xavier Rey, co-commissioner of Fantin-Latour; À fleur de peau, at the Musée du Luxembourg in Paris until February 12th, 2017.

“In all art history, there is a very small group of painters whose work is immediately recognisable: Fantin belongs to that group,” Rey says.

Though he frequented the Impressionist painters, Fantin-Latour shunned the great artistic movement of his generation. Like Édouard Manet, who he admired intensely, he refused to join them.

Fantin-Latour’s self-portraits of the 1850s and 1860s show the influence of Eugène Delacroix and the Romantics. In the most striking, on loan from the National Gallery of Art in Washington, the painter’s head is lowered like a bull about to charge; all contained energy and violence. He looks like Leonardo DiCaprio.

Fantin-Latour’s father, also a painter, taught him to draw. Fantin-Latour entered the École des Beaux-Arts in 1854, but was expelled after three months for lack of progress. “His real training was at the Louvre, where he enjoyed a reputation as a brilliant copyist,” says Laure Dalon, co-commissioner of the exhibition. “The old masters were his real teachers.”

But while Manet was shocking the bourgeoisie with his insolent nudes in Olympia and Le Déjeuner sur l’Herbe, Fantin-Latour painted quiet pictures of his sisters reading and embroidering. The figures appear isolated from each other, each enveloped in her own thoughts.

“There’s an atmosphere in all Fantin’s paintings, whether it be the portraits, group portraits, still lifes, allegorical or mythological scenes,” says Rey. “A kind of mist, a way of treating the light, which creates a certain distance, and which belongs to Fantin alone.”

A century after the painter Jean-Baptiste-Siméon Chardin, Fantin-Latour too could be called “the painter of silence”.

In 1863, Fantin-Latour met Berthe Morisot and her sister Edma when they became copyists at the Louvre. Five years later, he introduced Morisot to Manet in the Louvre. Manet would paint Morisot 14 times, and his Berthe Morisot with a Bouquet of Violets (1872) surely counts among the most eloquent portraits of all time.

Although Morisot married Manet’s brother Eugène, she is believed to have loved Édouard.

Fantin-Latour also met his wife Victoria Dubourg, another painter, when they were copying in the Louvre. On their betrothal in 1869, he gave Victoria the exquisite Still Life (The Engagment) showing an overflowing bowl of strawberries, a blue-and-white vase filled with spring flowers, a creamy white camellia and a glass of red wine.

Verlaine’s love poem Green reads like a description of Still Life (The Engagement): “Here are the fruits, flowers . . . and here is my heart that beats only for you./ Do not tear it apart with your two white hands.”

Not since the Dutch Golden Age had anyone painted still lifes as sumptuous as Fantin-Latour’s, with a touch of modern hyper-realism.

In 1859, Fantin was bitterly disappointed that his first three submissions to the Salon were rejected. He travelled to London at the invitation of his friend, the American painter James McNeill Whistler. There Fantin-Latour met the art dealers Ruth and Edwin Edwards, who fed the insatiable demand for his still lifes in England.

Fantin-Latour loved flowers and painted more than 500 still lifes, the best of which are on exhibition at the Musée du Luxembourg.

Fantin-Latour continued painting his entourage. His wife’s sister Charlotte, a German language teacher, appears in several canvases, invariably more attractive than Victoria. A pretty blonde with a grave, enigmatic expression, she sits in an elegant blue-grey dress and wears a black hat with flowers, in her portrait from the Musée d’Orsay.

Fantin-Latour’s correspondence indicates Charlotte was often present in his and Victoria’s home. Charlotte never married. As with Manet and Morisot, art historians speculate about a romantic attachment between painter and sister-in-law.

After Fantin-Latour’s death, his widow gave his archives to the museum in his home town of Grenoble. They included more than a thousand black-and-white photographs of nude women. Live models were expensive and Fantin-Latour was shy.

As he grew older, Fantin-Latour concentrated on what he called “works of imagination”. Paintings inspired by mythology, and by the music of Richard Wagner, Robert Schumann and Hector Berlioz, resembled the symbolist’s style.

“I’m not doing any more flowers,” Fantin-Latour wrote. “I can, thank heaven, do what I want to.”