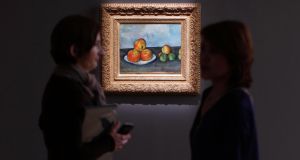 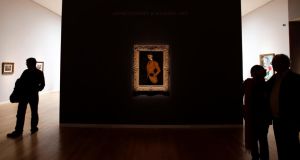 The first of New York’s famous spring auctions got off to a strong start with Sotheby’s solid sale of Impressionist and modern art last night taking in $230 million, led by a $42 million Cezanne still life and a $26 million Modigliani portrait.

A year after Sotheby’s set the world auction record for any work of art with its sale of Edvard Munch’s The Scream for $120 million, it managed a sale of works by Picasso, Rodin and Monet that saw 85 per cent of 71 lots on offer finding buyers and came in just under its high pre-sale estimate of $235 million.

Calling its offerings “an extraordinary group of material,” Simon Shaw, New York head of Impressionist and modern art for Sotheby’s, said “it’s very satisfying to see that the market agreed with us.”

“If anyone needed a signal that the Impressionist market is not just alive but thriving, this sale provided the evidence,” Mr Shaw added.

The once-dominant Impressionist market has been eclipsed in recent years by the booming market for post-war and contemporary works, which have seen prices spike year after year.

David Norman, Sotheby’s worldwide co-chairman of Impressionist and modern art, noted that the results showed that collectors “haven’t all moved into contemporary yet.”

Officials also said the sale was marked by unprecedented participation from Latin American and Asia collectors, providing further evidence of an increasingly global art market, at least at its highest echelons.

Prices held up against Sotheby’s estimates, but bidding was measured and not marked by the free-wheeling sprees that characterized other successful sales in recent seasons.

The sale’s top lot was Cezanne’s still life Les Pommes, which carried a pre-sale estimate of $25 million to $35 million but fetched $41.6 million including commission.

A signed 1906 cast of Rodin’s Le Penseur (The Thinker), one of the world’s most recognizable sculptures, was estimated to sell for about $10 million but did far better, going for just over $15.8 million.

A record was set for Georges Braque when Paysage a La Ciotat soared to $15.8 million, beating the high estimate.

Other highlights included Modigliani’s portrait L’Amazone which sold for $25.9 million, in the middle of its estimated range; and Monet’s Poirier en fleurs, which went for just over $8.5 million, beating the high estimate of $7 million.

Fernand Leger’s Trois femmes as la table rouge, which was being sold by pop diva Madonna to benefit her foundation for girls’ education, fetched $7.2 million, above the high estimate.

The sales continue this evening with Christie’s auction of Impressionist and modern art.

Irish women artists to show at $€X¥ in the snow

Steve Martin and Martin Short: ‘I have about 800 cousins coming to the Dublin show’
7

There once was a girl who seduced her sister’s huband, and he hanged himself
9