An exhibition on the life and work of Yves Saint Laurent skips some key elements, but doesn’t skimp on the colour 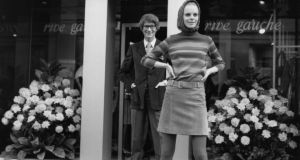 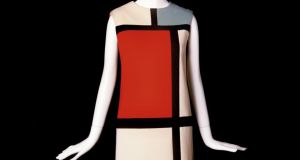 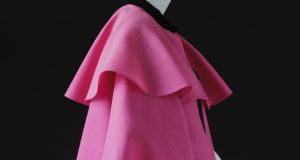 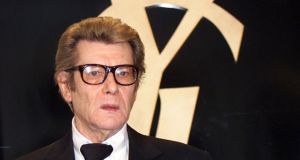 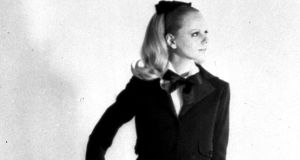 In the early 1950s, a young Algerian man arrived in Paris, armed with an array of fashion sketches. Within a year, the 18-year-old student of haute couture was snapped up by Christian Dior and hired as his studio assistant. Yves Saint Laurent was to become one of the major figures of 20th-century fashion and, like Coco Chanel, a seminal influence on the development of women’s fashion and female identity.

An exhibition in Brussels looks at the life and work of Yves Saint Laurent using more than 100 pieces, most of which are on public display for the first time. It opens with a black and white photograph of a young Saint Laurent, striking and magnetic astride a motorbike, smiling into the sun. But while the retrospective reveals something of the man behind the work, the fashion steals the show.

An assortment of mannequins intersperse the exhibition space, adorned with some of the most iconic creations from Yves Saint Laurent’s collections. Most are instantly recognisable, either as original pieces or through their subsequent influence on fashion. The early collections from the 1960s, launched under Saint Laurent’s own fashion house, contain the genesis of a signature style that was to revolutionise women’s style.

Pieces from the 1960s – the 1962 trenchcoat design, his first tuxedo, transparent dresses, the safari jacket and trouser suit – radically changed the landscape of for the modern, emancipated woman and reflect the sexual politics of the time.

The blurring of gender boundaries is a constant theme of Saint Laurent’s work. He succeeded in transposing traditional masculine styles for the female form by introducing subtle differences in design. The solid structure of the tuxedo jacket, for example, was made more feminine using gilded buttons, low necklines and chiffron. This blurring of gender roles is encapsulated in a 1969 photo of Saint Laurent and model Betty Catrouz. Both are wearing a safari jacket with a low-slung belt, Saint Laurent wearing his as a tunic, Catrouz wearing hers as a short dress, the décolleté laced up in a subtle alteration to the piece. Through unisex pieces such as the safari jacket, Saint Laurent explored the gender possibilities opened up to men and women by clothes.

Strong friendships, such as the one with Catrouz, were a feature of the designer’s life. Saint Laurent and his partner Pierre Bergé were at the heart of the 1960s arts and fashion world. Rudolf Nureyev and Margot Fonteyn, Catherine Deneuve and Andy Warhol were all close friends. Many of these friendships arose from artistic collaborations. Saint Laurent designed costumes and sometimes sets for ballets, films and plays, including the French writer Jean Cocteau’s three-act play, L’Aigle à Deux Têtes and the 1963 film The Pink Panther . Bianca Jagger wore a Saint Laurent trouser suit for her wedding to Mick Jagger, in 1971, in St Tropez. Warhol produced four portraits of Saint Laurent in the early 1970s.


Zeitgeist
But while he moved in high circles, the influence of street fashion was a driving impulse behind Yves Saint Laurent’s work. In tune with the zeitgeist of the late 1960s, Saint-Laurent wanted to bring haute couture to the masses. He was the first designer to launch a full prêt- à-porter collection and in 1966 opened Rive Gauche, his first ready-to-wear boutique, in Paris.

Unlike the world of high fashion, which focused on custom-made garments for clients, prêt-à-porter allowed designs to be mass produced and sold directly to the public. The success of Rive Gauche spawned a number of similar shops globally. Whether Saint Laurent ultimately succeeded in democratising fashion – relatively few could afford the Rive Gauche collection – it paved the way for ready-to-wear fashion and the cross-fertilisation between haute couture and high-street fashion that persists today.

This paradox – an instinctive left-wing impulse to push limits and embrace inclusivity even as he was creating garments for a select few – was a constant feature of Saint Laurent’s work. The controversial 1977 ad campaign for the launch of the perfume Opium (the first Yves Saint Laurent perfume, Y, was launched in 1964 ), fronted by Jerry Hall, contained the tag-line: “Opium – for those who are addicted to Yves Saint Laurent.” The ad caused a storm, prompting complaints that Saint Laurent was promoting drug abuse. The perfume went on to become a key part of the Yves Saint Laurent brand, affording consumers the opportunity to acquire an Yves Saint Laurent product, without having to pay haute-couture prices.


Precocious
The exhibition traces the emergence of Saint Laurent’s unique aesthetic sensibility and his influences. On display are a collection of paper dolls Saint Laurent created in his early teens, in Algeria, using cuttings from magazines owned by his mother. He created a “wardrobe” of different looks for the paper models, named after real-life models of the time, using paper and scissors, paint and ink. He also created elaborate programmes to accompany the collections, referring to contemporary suppliers to be used in his fantasy shows, including well-known embroiderers, shoe designers and make-up artists. The intricate, stylish paper designs reveal the precocious talent of the young Saint Laurent.

Juxtaposed with finished pieces are Saint Laurent’s early sketch-boards, showing the design process at work. Each piece from a collection was carefully planned, with a number and the name of a specific model sketched onto a board, alongside Saint Laurent’s sketches of the clothes. Also on display are white toiles, the early test garments on which Saint Laurent’s design were first drawn and cut.

But while the exhibition, based on material from the foundation set up by Saint Laurent and his partner Pierre Bergé, provides a fascinating insight into the designer's life and work, it has some gaps. Saint Laurent's constant struggle with depression is not touched upon, while his controversial and exuberant personality – in 1971 he posed nude for an ad for YSL Pour Homme cologne, for example – is also side-stepped.

Similarly, the business story behind the YSL empire is absent. Saint Laurent and Bergé secured the backing of a US businessman to set up the fashion house in the early 1960s and went on to sign hugely successful licensing deals for various YSL products. Today it is owned by French multinational PPR (formerly Pinault-Printemps-Redoute), which also owns Gucci.

Any gaps, however, are compensated for by the access offered to Yves Saint Laurent’s private archive. Ultimately, the array of material, particularly the early drawings and sketches, gives an unrivalled insight into the creative process and influences of a man who has shaped modern fashion.


Yves Saint Laurent: A Visionary runs at the ING Cultural Centre in Brussels until May 5th