Adult Swim are at it again, this time with John C Reilly packing shopping bags 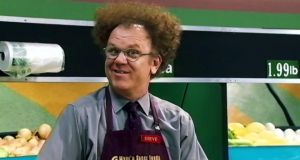 Adult Swim is in something of a golden age of surrealism at the moment. While John C Reilly’s character Dr Steve Brule (right) began with Tim & Eric (Tim Heidecker and Eric Wareheim), the latest show Bag Boy sees Reilly go meta, with his name in the credits listed as “Steve Brule”, and the latest character a hapless bag packer at a supermarket.

If you’re looking for a jilted sitcom that finds laughs in the jokes it doesn’t tell, then Bag Boy is for you. It runs in a traditional vanilla sitcom format, with the nostalgia tropes that Adult Swim so adores. This is outsider TV with grooves that are difficult to click into, but once you do, the whole thing flows in a rather poetic way.

Set in a supermarket from the Kenan & Kel school of retail interiors, Myer’s Superfoods has a disconcerting cast: there is creepy customer, love-interest check-out lady, the bagman himself, a pencil-breaking manager, a “hunk” called Chip, and a talking dog puppet/ imaginary friend called “Dog”, whose puppeteer is painfully visible every time he appears. In the “pilot”, a staff reward is offered for the capture of a shoplifter (Too Many Crooks?).

While some Adult Swim output offers surrealism in a “throw everything at it” kind of style, Bag Boy is more constipated, jokes are dragged out, lines are badly timed, the laughter track and applause linger a little too much. It’s disconcerting, and expertly constructed. You’d almost think Tommy Wiseau directed it (Heidecker and Wareheim actually did). But the Wiseau comparisons aren’t entirely redundant since Tim & Eric did try to bring Wiseau’s The Neighbours to the small screen. With Wiseau’s TV sitcom still pending, some of the slow-build genius dialogue in Bag Boy will have to do. “Can you tell me where the bananas are?” “What are you, some kind of monkey?” “Actually, I am.”