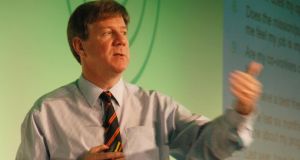 Adrian Furnham: “Pay people at the market rate and treat them well and you will have a motivated staff.”

Numerous works have been written about how to keep staff happy, motivated and productive. Adrian Furnham, professor of psychology at University College London for the last 25 years, can write his principles of good people management on a small piece of paper.

First priority is setting clear objectives. The second is supporting employees to do their job. The third is providing constructive feedback.

Stick to these and you won’t go far wrong, he says, even in a disrupted working environment where the pace of change is breakneck and managers are struggling to separate threats from opportunities.

“People always think that change is faster in their generation than in any other,” Furnham says. “However, I think there is reasonable evidence to suggest things are changing faster than ever before, particularly in relation to technology. We are all so interconnected now that changes in one part of the world create changes everywhere else.

“No one ever said managing people was easy: but we can learn to do it better to ensure our organisations thrive and survive in this uncertain world.”

For Furnham, doing it better starts with ensuring that an organisation’s goals, targets and key performance indicators are clearly articulated so people know exactly what is expected of them.

This needs to be backed up by feedback that’s broader than simply what is good or bad about an employee’s performance.

The third strand is supporting people to do their jobs. “Bosses often think that support staff are there to help them. I think it’s the manager’s role to support staff,” he says.

Asked if the pace of technological change is making employees scared about the future of work, Furnham says: “Only older people think like that. Young people think technology is wonderful, exhilarating, enabling and liberating. It’s generally those working with technology they don’t fully understand who think it will have a powerful negative effect on their future.”

Furnham’s particular field of interest is the world of work and he has a string of workplace-related publications to his name with intriguing titles such as The Dark Side of Behaviour at Work, Management Mumbo-Jumbo and The Elephant in the Boardroom.

Having studied employers, employees and workplaces in some detail, Furnham has seen both organisational success and dysfunction at close quarters and his research has produced some interesting results. For example, money talks, but not as loudly as you might think and not all those who are good at their jobs make suitable management material.

“If managers think that throwing money at employees will motivate them then they are fundamentally wrong,” Furnham says.

“Paying people equitably and fairly is essential, but beyond that it has no powerful effect. If anything, it can be deeply demotivating. One reason why money alone doesn’t work is because the effect wears off. Secondly, the most important thing about money for most people is not how much they’re paid, but how much they’re paid relative to other people. Thirdly, there are alternatives to money, such as time, which may be more valuable. Pay people at the market rate and treat them well and you will have a motivated staff.”

While most organisations reward successful employees with promotion to management positions, Furnham thinks this is not always the best option for the employee or the company.

“People are typically recruited for technical, supervisory or strategic roles yet it’s not unusual for someone hired for their technical knowledge to be promoted to managing people as a function of being good at something else,” he says.

“Paradoxically, people find themselves ‘rewarded’ by being put into management when they chose technology precisely because they don’t understand people or management. So you lose a good technical person and gain a bad manager. It may be more productive to reward them with more money and prestige and leave them where they are.”

Furnham also has some home truths for managers who try to pin the blame for poor engagement on employees rather than on themselves.

“Engagement comes from the way people are managed and one of the big things that drives disenchantment is hypocrisy – as in an organisation saying it believes in this or that but employees know from experience that it’s just PR spin,” he says. “A second is perceived inequity within a company and a third is distrust around breaking promises. There can also be disenchantment if organisations don’t show integrity when dealing with problems such as bullying or mistreatment.”

With many Irish companies still picking up the pieces after the crash, Furnham’s advice to those in the process of rebuilding is to create a forum where people can talk about what they’ve been through but within a finite time frame. “By all means have the discussion and express the emotions involved but then draw a line under it, move forward and get back on the wave,” he says.

Looking to the workplace of the future, Furnham expects to see the demise of the traditional office commuter and the rise of the “work nomad,” a person with a laptop and a mobile phone who can work from anywhere. “I think work is something people will do rather than being a place they will go and as technology continues to change more and more people will work from home or at long distance,” he says.

Like Noel Coward, Furnham believes “work is more fun than fun” and considers himself to be “a well-adjusted workaholic”. He rides a bike to work and does not have a mobile phone.

He concedes that while his line of work can facilitate this, it’s not a realistic option for most businesspeople. That said, he points out that hitting the “off” button is.

“I see people imprisoned by mobile phones, not liberated by them,” he says. “People are living in a very noisy world with things are coming at them all of the time and there is no time to reflect. That used to be one of the joys of long-distance flying: nobody could get at you.”

Adrian Furnham was a speaker at the IMI national management conference, at which he spoke about leading and motivating people in disruptive times

1 Aldi empire wracked by family feud
2 NatWest considers closing Ulster Bank in the Republic
3 TikTok to be banned from US app stores from Sunday
4 Will PTSB be Ulster Bank’s knight in shining armour?
5 EU signals late call on Apple tax appeal as deadline looms
6 NatWest confirms review of Ulster Bank as Covid-19 bites
7 How Ireland managed to green the White House
8 Cliff Taylor: What permanently low interest rates mean for you as a saver or borrower
9 Gabriel Makhlouf: ‘A full second lockdown would be very serious for the economy’
10 Mark Paul: Government faces dilemma on which businesses to save
Real news has value SUBSCRIBE