The accountancy firm is looking to hire audit, tax, advisory and consulting professionals 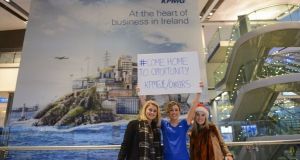 KPMG Ireland is ramping up its recruitment drive encouraging Irish emigrants to return home to work for it.

The careers team was at the arrivals gate in Dublin Airport last weekend to promote the company's #ComeHomeToOpportunity targeting expatriates in the UK, North America, Australia and beyond.

Paul Vance, head of recruitment at KPMG Ireland, said it “wanted to kick start a conversation about coming home to Ireland.”

“Throughout 2015, Ireland was in the news for all the right reasons and for many Irish people living abroad, this year was about starting to think about coming home,” he said.

Mr Vance said the company is growing because of increased client demand and is looking to hire experienced professionals across audit, tax, advisory and consulting.

“We’re recruiting across all lines of business but we have a particular focus at the moment on talking to people with backgrounds in management consulting, risk consulting and tax,” he said.

Mr Vance said the response to the campaign has been positive with members of the KPMG team at Dublin Airport seeking to sign people up.

“The campaign generated an immediate surge in CVs and enquiries from those looking to move home,” he said.

“Moving back home can be challenging, so we are helping by managing flights, searching for accommodation and general relocation assistance to help with the transition.”

Mr Vance said the mood among returning emigrants is “one of optimism.”

“People coming back to Ireland have lots of reasons to do so and now has never been a better time with the growth of the economy and the demand for talent. Many of the people we’re talking to are surprised at how much Ireland has changed for the better in career terms. While certain challenges remain, the outlook is much brighter than it has been for a number of years,” he said

“We want to reinforce the message that a return home to Ireland can be a permanent one and not just for Christmas. We are going to continue our campaign throughout 2016,” Mr Vance said.

1 ‘Saudi Arabia is where the opportunities will happen in future’
2 MSD buys Takeda biologics plant in Dunboyne
3 AI doesn’t have to kill radio stars, it can create them
4 State’s biggest landlord records 30% rise in rental income
5 Identigen founders make €12m each from sale of company
6 Irish tourism must also help itself to survive the pandemic
7 Ireland property rush risks repeat of crisis
8 How your country’s history affects the way you think
9 How the zombie apocalypse can help prepare us for real crises
10 Facebook agrees Irish wind-farm deal with Brookfield in Tipperary
Real news has value SUBSCRIBE