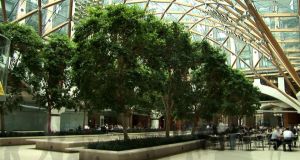 Research into the global impact of biophilic design in the workplace found employees who work in environments with natural elements incorporated into them reported significant increases in wellbeing, productivity and creativity

In recent years, companies have begun looking to incorporate more of the outside into their workplaces to create a better environment for employees.

It’s about time. Companies used to feel it was sufficient to shove a few plants in the corner in an attempt to make their offices look less hostile. But, increasingly, progressive firms are going further and introducing living walls, green roofs, interior waterfalls and a host of other features into their offices. The thinking is these features are good both for the environment and for employees’ mental health.

Biophilic design is a concept that seeks to bridge the divide between the natural and built environments to create workplaces beneficial to our well-being. Some recent studies seem to confirm that going green in the workplace has a positive impact on staff morale and productivity.

One study carried out by the University of Melbourne and published last month found glancing at a grassy green roof for only 40 seconds significantly boosted concentration.

Students taking part in the study were giving an attention-sapping task to perform but, about halfway through, half the group were shown a flowering roof while the others got to look out at a bare concrete one. Perhaps not surprisingly, those who had got to glance at the green roof made significantly fewer errors and demonstrated greater concentration afterwards than the others. Researchers concluded that the “living roof” provided a restorative experience that boosted the mental resources that control attention.

While Ireland may be somewhat lacking in living roofs, fear not because a number of alternatives studies have found that even adding a few pots plants to a room increases employees’ work engagement by making them more physically, cognitively and emotionally involved in their work.

Research undertaken by organisational psychologist Prof Sir Cary Cooper into the global impact of biophilic design in the workplace found employees who work in environments with natural elements incorporated into them reported significant increases in wellbeing, productivity and creativity. The study of 7,600 office workers from 16 countries looked at the impact of the physical environment on employee wellbeing and concluded office design was so important to workers that a third of respondents said it would affect their decision whether to work somewhere.

Limerick-born Joseph Clancy, a landscape architect and biophilic designer and researcher, believes businesses need to bring more of the outside inside.

“Just like people exercise and diet to keep their bodies healthy, we need to experience and interact with nature to maintain our mental and physiological wellbeing,” he said.

“We are hardwired for nature. Our brains process information present in natural environments with such ease that our brains can actually ‘take a break’ and rest certain facilities. But in environments devoid of nature, such as most offices, our senses are bombarded by information that our brains cannot process as easily. This leads to increased stress on the brain and reduces our ability to ‘rest’ or ‘restore’, leading to decreased productivity,” Mr Clancy added.

Not all organisations have the option or the budget to reinvent their workplaces to incorporate internal waterfalls, living roofs and so on but even smaller initiatives can help make things better for employees, studies have found.

A research team led by Marlon Nieuwenhuis, from Cardiff University’s School of Psychology, published a study last year that confirmed enriching workspaces with plants is a smart thing to do. The research found simply enriching a previously spartan space with plants served to increase productivity 15 per cent.

“This conclusion is at odds with the present economic and political zeitgeist, as well as with modern ‘lean’ management techniques, yet it nevertheless identifies a pathway to a more enjoyable, more comfortable and a more profitable form of office-based working,” said Nieuwenhuis.

Most Irish companies may not be at a point where they are prepared to redesign their workspaces, but some are taking steps to help employees get back to nature.

The social enterprise Grow it Yourself (GIY) has become well known in Ireland for its work in promoting food growing projects for community groups, schools and not-for-profit schemes. Over the past few years it has also been working with companies such as Diageo, Aramark, Eirgrid and Boston Scientific.

The organisation has done everything from running simple seed-sowing demos to developing full on-site vegetable patches for firms. In April, the group launched the “Give Peas a Chance” campaign to encourage teams at more than 500 companies to take part in its “al desko” food-growing experiment. GIY founder Michael Kelly says employers are starting to see how food growing can have a positive impact on physical and mental health.

“Our view is that people are very disconnected from where their food comes from and with nature in general. There is loads of research that’s been done which shows that time spent with your hands in the soil or connecting with nature is an incredibly positive thing and can help to alleviate depression, reduce blood pressure, boost productivity and so on,” he said.

“We believe our work has huge implications for employees’ wellbeing. People who have taken part in our projects have said how great it is just good to get out in the air and do a bit of digging and to collaborate with colleagues from other departments who they might not usually meet. Food-growing is a great leveller and allows people to start a conversation with someone very easily,” he added.

Mr Kelly admits that while initiatives such as Give Peas a Chance might seem trivial in the general scheme of things there is the likelihood that if people know more about where their food comes from they start making more informed decisions that will benefit them.

“There’s an evolutionary need we have to interact with living things and the absence of this makes people profoundly depressed, “he said.

“People can be freaked out by the horticultural snootiness out there with Latin names for plants and so on. We want to remove all those barriers and make it quick and easy for people to start growing at work and then hopefully graduating to doing the same at home as well. The more employers who encourage their staff to do this the better,” Mr Kelly added.

The pharmaceutical company Genzyme, based in Waterford, is one of the companies working with GIY to create a vegetable garden. Gemma Kennedy, high trust and engagement lead at Genzyme said there was huge interest from staff for the project.

“It’s a great opportunity for people to meet outside the usual work confines, have a bit of fun and share some tips and ideas about what they’re doing. From a resilience point of view, it’s great that staff members get out for a bit of fresh air during the day to clear the head and then go back to work feeling more rejuvenated. We feel that employees have definitely benefits from this and would recommend it to other companies to try,” she said.