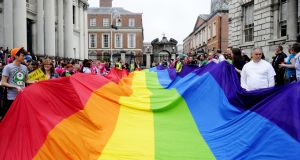 Consultancy firm Accenture was named Ireland’s best workplace for LGBT equality at an awards ceremony in Dublin on Tuesday.

The multinational company beat Ernst & Young and Microsoft - which were second- and third-placed respectively - to claim the accolade for the first time.

The Workplace Equality Index 2016 Awards in the Radisson Blu Hotel was hosted by 2014 Rose of Tralee winner Maria Walsh.

Ms Walsh, who is openly gay, handed out 16 trophies in recognition of the achievements of companies and individuals based on the Gay and Lesbian Equality Network (Glen) workplace equality index for 2016.

Speaking afterwards, Accenture’s LGBT network lead Peter O’Reilly said his employer had made a concerted effort to encourage LGBT inclusiveness by facilitating social events, an LGBT allies programme and the wearing of rainbow lanyards as a sign of solidarity.

Mr O’Reilly told the audience at the ceremony that he originally turned down an offer of employment from Accenture 15 years ago because at the time he did not consider it to be an LGBT-friendly workplace, before being convinced otherwise.

He encouraged companies to advertise their positive attitudes towards inclusiveness in order to attract employees from diverse backgrounds.

The event also heard personal testimony from IDA chief executive Martin Shanahan, who spoke candidly about his own experience of being gay in the workplace.

“I have never hidden my sexual orientation in my working life, nor have I advertised it more or less than my heterosexual colleagues.

“I do not believe that it should be remarkable that I’m gay because of where I work or the post I hold.

“I would like to see a situation where everyone’s sexual orientation in the workplace is unremarkable in a work context,” he said.

He said his comments about sending out the right message to the international business community by voting for marriage equality had been borne out by the positive feedback from multinationals since the referendum.

“I was asked a question during the referendum, I answered it honestly, [saying] that I felt that the ‘Yes’ vote would be positive for Ireland in terms of sending out a message that Ireland is an inclusive place where we value diversity.

“I absolutely believe that, and the ‘Yes’ vote has been very positive.

“The sentiment from multinational investors is clear. You can see there are quite a number of IDA-supported companies that are backing this initiative . . . You can never discern or disaggregate why exactly companies invest, but sending out a positive message certainly helps,” he told The Irish Times.

Elsewhere, Ernst & Young’s Catherine Vaughan was named senior leader of the year, Dena Y Lawrence of Microsoft was named the LGBT role model of the year and Alice Tolan of Eir was named LGBT ally of the year.

Glen’s workplace index takes into account factors relevant to LGBT inclusiveness, such as leadership, policies and visibility, when compiling the annual rankings.

“These organisations and leaders are playing an integral role in creating a business culture in Ireland that values the skills, ideas and creativity that LGBT people bring to the workplace,” said Glen co-chair Kieran Rose.

1 We have little chance of building enough homes to meet election promises
2 Corona beer firm reeling after 8% slide due to coronavirus
3 Why Irish banks are now looking beyond vulture funds on problem loans
4 Pharma giant AbbVie warned Government against ‘unfair’ €572m tax bill
5 Life as a Facebook moderator: ‘People are awful. This is what my job has taught me’
6 Claims of intra-family espionage emerge in billionaire Barclay family feud
7 ‘The only time apartments were viable was in . . . Ballsbridge, Killiney and Dalkey’
8 Coronavirus: Stocks fall again in worst week since 2008 crisis
9 Hotel Meyrick in Galway wins planning appeal over additional rooms
10 How well paid do you think you are? Here’s how to work it out
Real news has value SUBSCRIBE