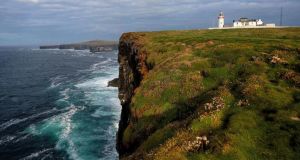 The awards honour outstanding achievement in the Irish business community. The editorial team at InBusiness magazine compiled a shortlist of nominees and assessed the performance of the company or service over the year to pick one eventual winner.

“This was one of the easier categories to choose from as we felt that given the success of The Gathering in 2013, a strong contender was needed to become the next big thing in Irish tourism,” said Joseph O’Connor, business editor at Ashville Media Group, which publishes InBusiness and Business Ireland magazines.

“The Western Seaboard has so much to offer tourists from home and abroad and Fáilte Ireland has succeeded in delivering a project and brand that will make us once again stand out from the crowd on an international stage through the Wild Atlantic Way initiative.”

The 2,500 km route, which runs along Ireland’s western coast from the Inishowen peninsula in Co Donegal to Kinsale in Co Cork, represents a €10 million investment during 2014 from Fáilte Ireland.

The bulk of that investment went towards installing signage along the route (€3 million); building 159 Discovery Points and 25 embarkation points where travellers can stop and learn more about the area (€4.6 million); and developing the Derrigimlagh Signature Discovery Point Project at Clifden, Co Galway, the site of the first commercial transatlantic wireless station, which went into service in 1907, and the end point of the first non-stop transatlantic flight by British aviators Alcock and Brown in 1919 (€990,000).

“[The Wild Atlantic Way] visitor numbers are significantly up, but crucially revenue is rising at an even faster rate,” said Fáilte Ireland chief executive Shaun Quinn. “This means that we are receiving more visitors and that they are spending more than ever before.”

“2014 was all about marking out the Wild Atlantic Way route, 2015 will be about bringing it to life.”