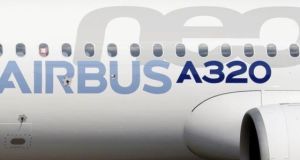 The €125m engine order follows SMBC’s announcement in 2014 that it was ordering 110 Airbus A320 neos. Photograph: Reuters

Dublin-based aircraft lessor SMBC Aviation Capital has ordered 10 engines worth €125 million to power some of the 110 Airbus craft that it ordered in 2014.

SMBC said on Thursday that it has ordered 10 Leap-1A engines, designed for use on single engine aircraft, from manufacturer CFM International.

The Leap 1A engine is set to come into service in mid 2016 and is 15 per cent more fuel efficient than its predecessors. It also cuts greenhouse gas emissions and noise.

SMBC chief executive, Peter Barrett, the company was pleased with the engine’s performance during its ground and flight tests.

CFM chief executive, Jean Paul Ebanga, pointed out that SMBC already has a large fleet of craft powered by the company’s engines.