Company calls on Greek authorities to back plan to waive charges 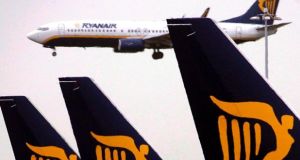 Ryanair plans to waive charges for Greeks on routes connecting Athens to Chania, Rhodes and Thessaloniki for two weeks, starting from July 13th.

Ryanair has called on Greek authorities to back its plan for free flights on some domestic routes for two weeks as the country struggles to stave off economic collapse.

Ryanair plans to waive charges for Greeks on routes connecting Athens to Chania, Rhodes and Thessaloniki, starting from July 13th.

The offer is dependent on aviation authorities and Athens airport also agreeing to scrap fees, the Dublin-based carrier said on Thursday.

“Ryanair is now requesting our partners to join our commitment by easing the pressure on the Greek people in making this beneficial gesture,” the company said.

Chief executive officer Michael O’Leary, once notoriously dismissive of customers’ desires for anything other than cheap and punctual flights, has softened the airline’s image over the past year.

O’Leary on Wednesday described the Greek crisis “as a tragedy”.

Ryanair said last week that Greeks will be able to buy tickets for its flights using cash, as bank cards are increasingly declined amid the government’s capital controls.

Ryanair relies predominantly on cashless transactions because the vast majority of its customers buy their tickets online.

Ryanair bases four aircraft in Athens, serving 12 destinations including London, Milan and Brussels, with the operation forecast to attract 2.2 million customers this year, according to its website.

The carrier also has smaller bases in Thessaloniki and Crete and serves eight other locations.