Additional 1.5 million passengers used the airport in the first six months of 2016 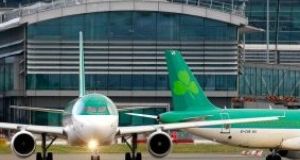 The number of passengers using Dublin Airport as a transfer hub increased by 28 per cent to almost 448,000 passengers in the first half of 2016

Passenger numbers at Dublin Airport rose by 13 per cent to more than 13 million during the first half of the year, new figures show.

The airport welcomed more than 1.5 million extra passengers in the January to June period with DAA, the former Dublin Airport Authority, predicting record numbers for the year as a whole. In 2015, 25 million people travelled through Dublin Airport, the highest ever recorded.

The number of passengers on domestic flights increased by 25 per cent during the first half of the year with almost 45,000 people taking flights within the Republic of Ireland.

UK passenger traffic rose by 13 per cent with almost 4.8 million passengers flying between Ireland and 19 cities during the first half of the year.

Transatlantic traffic rose 19 per cent with 1.2 million passengers travelling between Dublin and North America. This summer 10 airlines are flying 342 flights to and from North America to 11 destinations in the US and four in Canada per week – an average of 48 flights a day.

Other international traffic, which includes flights to destinations in the Middle East and Africa, fell by 1 per cent with more than 365,000 passengers flying to and from these locations.

The number of passengers using Dublin Airport as a transfer hub increased by 28 per cent to almost 448,000 passengers in the first half of 2016. Last year, as many as 1 million transfer passengers used the airport.

“Passenger volumes are continuing to grow strongly at Dublin Airport and this is due to the addition of 15 new services to our route network,” said the airport’s managing director, Vincent Harrison.

“The outlook for the rest of the year remains positive with 2016 on course to surpass last year,” he said.

Dublin Airport, which opened on January 19th, 1940, now has direct flights to more than 180 destinations in 40 countries on four continents.

1 How much state pension will I get next year?
2 Oxford Covid vaccine trials offer hope for elderly
3 Ulster Bank to introduce new card payment controls on app
4 Hurrah for the companies giving staff more time off
5 How long can Government afford to keep State pension age at 66?
6 Covid-19 will worsen shortage of accountants, says CPA Ireland
7 Sustainable investment: How your pension can help tackle climate change
8 The baroness with grande distribution in her blood
9 ‘Brexit readiness’ tool launched for Irish business amid trade talks impasse
10 Investors unnerved by Brexit, Covid-19 and US election jitters
Real news has value SUBSCRIBE