Airline, which is looking to establish a service here, looking to extend short-haul network 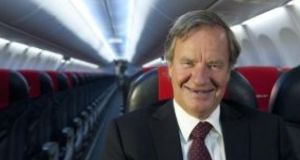 Norwegian Air, which is seeking to establish a low-cost long-haul business in the Republic, is interested in partnering with other European low-cost carriers such as Ryanair and easyJet to extend its short-haul network.

Norwegian, Europe’s third-biggest budget airline by passenger numbers, has launched flights to the Middle East, southeast Asia and the United States, targeting a growing share of the long-haul market.

“We will definitely look at cooperating with other low-cost players. We cannot cover the whole of Europe, ” Bjoern Kjos said on the sidelines of the Annual Global Airfinance Conference in Dublin.

“That gives us possibility to fly passengers not to 450 routes, but maybe 2000 routes,” he added.

Norwegian Air is using Boeing 787 Dreamliners to fly passengers to the United States and Asia and Kjoes said those operations were already profitable with just 7-8 aircraft flying.

Ryanair chief executive Michael O’Leary has also mooted the idea of providing short-haul flights to join up with the long-haul networks of full-service carriers, but has refused to share in the costs incurred by delays or lost baggage.

Mr Kjos said that as it tended to be long-haul flights that suffered major delays, then it was clear who would be liable.

The carrier, which has a fleet of around 100 aircraft and over 260 planes on order, also said it was confident in being able to fund all the aircraft it has on purchase.

“What we’re doing right now is spending some time in the United States to source financing from the US capital markets,” chief financial officer Frode Foss said.

He said Norwegian was looking at private placements, which it has previously used to fund plane purchases, and also enhanced equipment trust certificates (EETCs), which are often used by US carriers.

Sale and leasebacks, Japanese operating leases, where a lease is fully or partly funded by a Japanese investor, and export-import bank financing are also options, he said.

Other airline executives and bankers at the Airline Economics conference in Dublin agreed having access to a diverse range of funding options was crucial.

“There are periods of time when EETC markets are closed, periods of time... when banks are less willing to lend into this market. I think as a treasurer or cfo, you want to have multiple sources of financing that you can go to because it is a cyclical industry ...” Leo Burrell, managing director at Credit Agricole CIB said.

Norwegian also has its own leasing unit, Ireland-based Arctic Aviation Assets Ltd, which manages all its aircraft.

AAA has leased out 12 of the A320neo planes it is expecting over the next two years to HK Express and Kjoes said more could be leased out in the years to come.

Norwegian has also extended its fuel hedging, Mr Kjoes said. It is 50 per cent hedged for this year and is looking to hedge 50 per cent of its needs for 2017 too.

10 Eir decides against passing on VAT reduction to customers