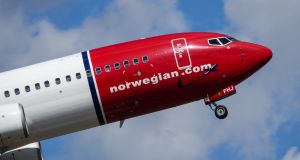 The High Court has wound up an Irish-registered company within the Norwegian Air airline group.

An examiner was appointed to the airline, which owes its creditors some $5 billion (€4.1 billion), and several of its subsidiaries last month.

Arising out of Norwegian’s decision earlier this week to cease its long-haul services the examiner to the companies, Mr Kieran Wallace, on Friday asked Mr Justice Michael Quinn to make an order winding up one of the Irish subsidiaries, Torskefjorden Leasing Ltd (TLL).

The judge made the order winding up the company late on Friday evening.

Lawyers representing most, but not all, of the group’s creditors said they were either not opposing, or taking a neutral stance regarding the application to wind up TLL.

The judge said he was satisfied to appoint Mr Wallace and Andrew O’Leary, both of KPMG, as joint liquidators of TLL.

Seeking the order, Kelley Smith SC for Mr Wallace said that as part of a business plan aimed at restructuring the airline, announced to the Oslo Stock Exchange, Norwegian had decided to cease its long-haul activities.

Counsel said the airline plans to concentrate on its Nordic routes.

She said while Mr Wallace was broadly in agreement with that plan, which he continues to evaluate, the decision to end long-haul services meant that TLL was no longer commercially viable.

TLL operated as a lessor of 24 wide-body Boeing-made jets, which it had sub-leased to other companies within the group, to operate its long-haul routes.

TLL’s only income, counsel said, came from the sub-leasing arrangements.

As a result of the decision to end the long-haul business, Mr Wallace was of the view that (TLL) should exit the examinership process and be liquidated.

Those firms are involved in activities including the leasing, management and subleasing of assets, including aircraft, and financing.

Mr Wallace is in the process of putting together a scheme of arrangement with the airline’s creditors, which if approved by the High Court, will allow Norwegian to continue to trade as a going concern.

The court heard that while the business plan may have a significant impact on the numbers employed by the group as a whole, he remains of the view that the airline has a reasonable prospect of survival if certain steps are taken.

The group’s creditors include subsidiaries of Airbus and Boeing, aircraft leasing firm Avolon, several lenders and financial firms, and the Revenue Commissioners.

On Friday, Declan Murphy BL for the airline group said it was not opposed to the examiner’s application regarding TLL, and added that it would “save time and money” to appoint Mr Wallace and Mr O’Leary as TLL’s liquidators.

Rossa Fanning SC, for a group of creditors owed hundreds of millions of euro, said some of his clients were significantly affected by the airline’s decision and TLL liquidation.

However, in light of the examiner’s findings, none of his clients, including aircraft lessors, were not opposing the application to wind up TLL.

Late last year, Norwegian’s board of directors petitioned the Irish courts for the appointment of an examiner who could put together a survival plan based on factors including that the group’s core business is good.

In 2019 the group had employed more than 10,000 staff and had operated 20 bases in 11 countries. However last year was difficult for the group and it commenced several cost reduction measures aimed at restoring it to profitability.

Last March, Norwegian was severely hit by the outbreak of the Covid-19 pandemic, effectively went into hibernation.

The grounding of the Boeing 737 Max and Boeing 787 Dreamliner aircraft due to technical difficulties had also adversely affected the airline’s finances, the court heard.

While it had entered into arrangements regarding its debts under a restructuring plan, the Norwegian government announced earlier last month that it would no longer provide any more State financial support to the group.