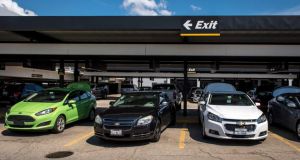 Car rental company Hertz reported a 5 per cent decline in quarterly revenue, hurt by a strong dollar and lower car rental volume in the United States.

Hertz, which received more than two-thirds of its car rental revenue from airport services in 2014, has been affected by the strong dollar that made travel to the United States pricier for tourists.

The company also closed about 200 stores at off-airport locations in the second quarter, as part of its efforts to focus on more profitable locations and to save $300 million by March.

Analysts on average had expected $2.71 billion, according to Thomson Reuters I/B/E/S.

Analysts on average were expecting $1.46 billion.

The is the first time Hertz is reporting its quarterly results after restating financial results for three years through 2013, in July.

Hertz had to strike off $144 million in net income for three years in the restatements.

Hertz’s stock, which closed up 7.5 per cent in regular trading on Monday, was down 2.6 percent in extended trading.

Up to Friday’s close, the stock had fallen about 48 per cent since June 5th, 2014, the day before the company said it would restate 2011 results.