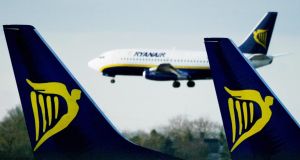 At least 35 prosecutors and customs investigators quizzed pilots and other staff at Ryanair hubs across Germany on Tuesday, including Berlin and Cologne.

German investigators have raided six Ryanair bases as part of an investigation into claims of systematic evasion of income tax and social security payments involving pilots flying its planes.

At least 35 prosecutors and customs investigators quizzed pilots and other staff at Ryanair hubs across Germany on Tuesday, including Berlin and Cologne.

After questioning pilots about their employment relationship with Ryanair, investigators seized computers, iPads, rosters and other documents. According to reports, at least two pilots’ homes were also searched.

German prosecutors in the western city of Koblenz said the raids were part of an investigation into two British personnel agencies that supply Ryanair with staff, who then work for the airline as self-employed pilots.

Ryanair confirmed in a statement that it had met with and agreed to assist German tax authorities into their investigation of contractor pilots.

“Ryanair requires all of its pilots, both directly employed and contractor, to be fully tax compliant at all times,” said the airline. “The German tax authorities have confirmed that Ryanair is not the subject of any tax investigations.”

However, German investigators said Ryanair’s business model was a central part of the investigation, in particular whether, by not directly employing pilots who fly its planes, the airline saves considerable tax and non-wage costs.

“We hope that these new investigations will, in the end, lead to the end of an unfair employment model,” Mr Jim Phillips, head of German pilots’ organisation Cockpit, told Zeit Online.

Ryanair rejects that there are concerns arising from its business model and points to its high safety record.

The intensive questioning of pilots in Germany on Tuesday included questions on how their working relationship with Ryanair came about and whether they flew for other airlines.

1 Lockdown exit: How can Irish economy reopen without big health risks?
2 Property market has not felt full impact of Covid-19, warns Sherry FitzGerald
3 Finance ministers gather as fears grow even the future of the euro zone is at risk
4 Coronavirus: Property rental in the jaws of the epidemic
5 I want to change my will quickly in case I fall ill. Do I need a lawyer?
6 Government announces €1bn in supports for businesses
7 Q&A: Where do we stand on mortgage holidays and payment breaks?
8 Tesco says coronavirus costs could reach €1bn
9 Cold water poured on idea of ‘helicopter money’
10 Toast believed to have cut its Dublin staff by 50%
Real news has value SUBSCRIBE