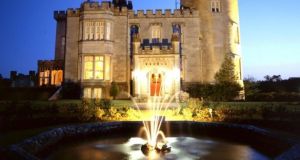 As well as Dromoland Castle, the company also operates the Inn at Dromoland which it acquired in 2012 for €2.1 million

The owner of the five-star Dromoland Castle hotel in Co Clare saw profits surge last year as turnover climbed from €17.3 million to €19.5 million.

Accounts recently filed with the Companies Registration Office show Dromoland Castle Holdings Ltd, recorded a pre-tax profit of €1.29 million for the 12 months ending December 31st, 2015. This compares with a €324,889 profit for the preceding year.

As well as Dromoland Castle, the company also operates the Inn at Dromoland which it acquired in 2012 for €2.1 million. Among the famous guests to have stayed at the castle are George W Bush, Bill Clinton, Nelson Mandela and the King of Spain Juan Carlos I.

Ms Horgan claimed in a sworn statement she was being made “ a scapegoat for fraud at the hotel” due to alleged suspicious transactions carried out by another employee in the finance department.