Ciyjet to fly from Cork to Nantes and La Rochelle 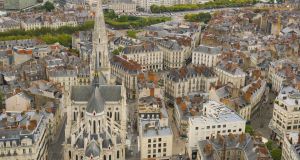 The flights to Nantes will be weekly. Photograph: iStock

Cityjet will begin flights from Cork to Nantes and La Rochelle in France this weekend as part of its summer schedule.

The regional airline, which recently took delivery of the first of its new Sukhoi Superjet craft, will begin a twice-weekly service to La Rochelle on Saturday, 18th June and once-a-week flights to Nantes on Sunday, 19th June. Both will run until late August.

Welcoming the launch, Cork Airport managing director, Niall MacCarthy said that it has been working hard to boost the number of destinations available from there.

Cityjet executive chairman, Pat Byrne, said that the services would offer direct access to travellers from both the Munster region and those from northwest France interested in holidaying in Ireland.

Cityjet recently announced that it would be dropping its flights from Cork to London City Airport on the grounds that it was not viable.

Cork is waiting to hear if the US will approve Irish-registered Norwegian Air International’s application for a foreign carrier’s permit which will allow the airline launch a planned service from the airport to Boston.