Car manufacturers and their suppliers are having to change how they think to stay ahead in the fast moving areas of connected car, autonomous driving and personal mobility 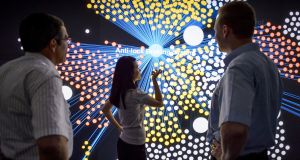 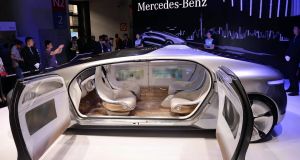 A driverless car from Mercedes-Benz on display at a Consumer Electronics Show. Photograph: str/afp/getty images 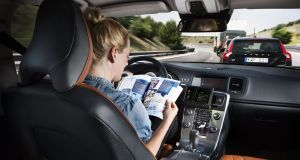 Staffed by 1,200 researchers and 500 PhD students and interns across disciplines from electrical engineering and computer science to microsystems technology, its layout is inspired by the Stanford University campus. This is no accident. Bosch wants the high-flying thinking common to both this venerable institution and the movers and shakers in nearby Silicon Valley to rub off on its employees.

This need to create an innovative buzz typical of start-up clusters is not confined to Bosch. It’s something the entire motor industry needs to tackle the stiff competition from the new hi-tech companies determined to dominate the motor industry of the future. OEMs (original equipment manufacturers) and their suppliers have to make a choice – start thinking more like valley entrepreneurs or get left behind.

OEMs, such as Ford and Daimler, are already changing their message and now talk more about mobility solutions and less about making cars. In turn their suppliers are hiring thousands of engineers to fast track their R&D and going on spending sprees to buy innovative young companies developing the cutting-edge technologies they need to stay ahead.

At one time, OEMs used independent design houses like Pininfarina to develop distinctive styling to set their products apart. Now, that role is increasingly assumed by suppliers with expertise in today’s main differentiator – connectivity and active-safety features.

Over the last five years vehicle hardware has almost taken a back seat as software and data management have moved centre stage. In addition, technology is moving mobility to a point where people will no longer need to own or drive a car. Instead they will commute in self-driving vehicles and only pay for use.

This scenario is hugely attractive to those developing the enabling technologies not least because 85 per cent of the world’s population does not have a driving licence. With an autonomous pod this is irrelevant so it represents a massive potential revenue stream. But as of now it’s an area from which the traditional motor industry is largely excluded.

Google and Apple have already cut a swathe when it comes to in-car infotainment systems and their tight grip is dictating both direction and the pace of change. In this shift in the balance of power, technology companies such as Nvidia, which produces the graphics processing power that connected car and autonomous driving systems depend on, also have huge clout and influence.

These high-tech players also have a view of mobility unencumbered by over a century of producing cars a certain way. This blue sky thinking poses a big challenge to the motor industry’s traditional “hardware first” mindset and leaves it fighting a technology and a perception battle as people start thinking of California as the new heart of the mobility industry.

Needless to say the idea of Silicon Valley taking over is not going down well and the counter attack has begun. Bosch’s new R&D centre is one example. A second is the purchase of Nokia’s Here mapping service, by BMW, Daimler and Audi last year.

Following the principle of keeping one’s “enemies” close, Audi, BMW and Daimler among others have all set up R&D centres on the US west coast. Late last year Daimler boss, Dieter Zetsche, took time out to meet Silicon Valley companies. Following the meetings he is reported as saying that the exchanges underlined the need within his organisation for a change in mindset around speed, competence and the acceptance of failure.

“Innovation is primarily coming from the hi tech industry, although the tier one suppliers like Delphi and Bosch have been very active,” says Egil Juliussen, director of research, infotainment and advanced driver assistance systems at IHS Automotive. “All are facing strong competition and have to become more agile in how they develop their products. They are also coming from the driver assist systems side of the industry where they extend autonomous driving step-by-step. Google wants driverless cars and is going straight there as quickly as possible.”

It is not just European companies that are feeling the heat. Another of the world’s top suppliers, US-owned Delphi, is adding 1,000 engineers to its already 20,000-strong cohort because its CTO, Jeff Owens, believes that future “explosive and exponential growth is going to be in software and systems integration”.

Apart from creating homegrown talent, Delphi is also investing in start-ups to help it bring innovations to market faster. It has put money into powertrain electronics company, Tula Technology, and into Quanergy Systems which is developing low cost lidar for self-driving cars.

Closer to home, global Machine-to-Machine (M2M) connectivity platform provider, Dublin-based Cubic Telecom, landed an €18 million investment from Audi Electronics Venture (a subsidiary of the car company) and the NASDAQ-listed Qualcomm Incorporated in 2015. It is now working with Audi and with one of Silicon Valley’s most “out there” entrepreneurial companies, EV manufacturer, Tesla.

“Acquisitions of existing companies and competent start-ups will become more frequent,” Juliussen predicts. “Harman (which engineers connected car products) has been the most aggressive. It acquired two companies in 2015 and in early January bought TowerSec Automotive Cyber Security which was only set up in 2012.” In addition, Harman has recently opened a new R&D centre employing 1,000 people to expedite the design of technologies that support everything from infotainment to hands-free driving.

The motor industry is on the cusp of a seismic shift and Ford of Europe CEO, Jim Farley puts it succinctly when he says “the next phase in our industry’s development may well be as big as the revolution we created when we opened the possibility of car ownership to the masses with the Model T.” Trendy design . . . with a ‘planned’ German twist Bosch has gone all out at Renningen to create the informal office design favoured by trendy tech giants.

But being German, this is planned rather than spontaneous.

The layout is based on a networking matrix that analysed how intensively individual disciplines exchange information with each other. The closer units work together, the shorter the physical distances between them in the building.

Also guaranteed to test the German preference for order is a creativity room with a clock that tells the wrong time.

Staff are not desk bound and can work anywhere within the building’s open or private spaces or indeed outside if the mood takes them.