Technology is helping the adult entertainment industry enter the mainstream 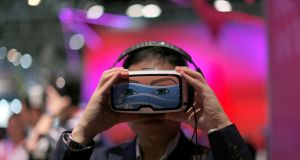 In more innocent (stupid) times, people believed bicycle seats turned women into lesbians. While it has never technically been disproven, it’s probably fair to assume this hypothesis is nonsense.

The humble pushbike is no longer a bone of contention when the origins of sexual orientation are being discussed by the chattering classes. The homophobic anti-velocipede technophobes of the early 20th century were swiftly discredited and life went on.

As it becomes more and more like the real thing, the technophobe in us all must ask if this might pose new problems.

“Consumers and their partners need to understand how it’s made, and how what’s portrayed is not what real sex is like.”

There are many ways to get your digital kicks on the internet, some of which include interactions with real people on the other end. “With virtual reality games or apps, the other person is not real,” says Ging. “Again most social commentary about this tends to focus on the potentially negative implications vis à vis intimacy – what happens when people get attached to or develop real relationships with their hardware and software, as in the film Her? This is a very valid question, whether you look at it from a philosophical, sociological or psychological perspective.”

“Take Love Plus, a dating-simulation game developed for the Nintendo DS, in which the female ‘dates’ modify their personas to adapt to the needs and desires of the [male] user,” suggests Ging.

Not everyone is convinced AR, VR, or anything else will have any more of an impact on society than other media platforms used by the industry in the past.

This estimate is broken into two parts: about $700 million in hardware sales, and the rest from content.

VR already has numerous applications for consumers and businesses.

In the short term, however, commercial growth is likely to be driven principally by the gaming industry.

Deloitte estimate about 2.5 million VR headsets and 10 million corresponding games will be purchased in 2016 alone.

According to estimates from US investment bank and asset management firm, Piper Jaffray, by 2025 adult content will be the third-biggest virtual reality sector, after videogames and NFL-related content.