Viber to be sold to Japan’s Rakuten for $900 million 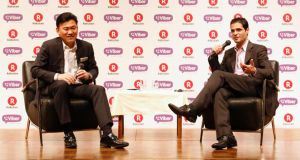 Japanese e-commerce giant Rakuten Inc has said it will buy call and messaging app provider Viber Media Ltd for $900 million (€657 million), aiming to use the Cyprus-based company’s network in emerging markets to expand the reach of its digital content.

“This acquisition is a totally new strategy that will take Rakuten to a different level,” Mr Mikitani said, announcing the deal after the company reported an 80 per cent jump in its 2013 operating profit.

Mr Marco told the same media conference the acquisition would help Viber become a platform for digital content, not just a provider of free voice calls and messages.

Privately held Viber is funded from the pockets of its founders and several private investors from the United States, and competes with instant messaging apps such as WeChat, WhatsApp and Line.

It recently launched an instant messaging app for personal computers that allows users to make outgoing mobile calls to other Viber users and to non-registered mobiles, making it a rival to Skype.

The newly announced deal mirrors Ebay’s acquisition of Skype for $3.1 billion (€2.19 billion) in 2005. Ebay went on to write down the value of its investment by $1.4 billion. Skype was later picked up by Microsoft for $8.5 billion in cash.

Rakuten has been on an overseas buying spree in recent years as it seeks to expand outside its home market Japan, where economic growth remains sluggish.

Rakuten has acquired e-commerce providers from Brazil to Germany, as well as Toronto-based eReader business Kobo and online video providers Wuaki.tv of Spain and Viki of Singapore. In 2012, it made a large investment in website Pinterest.