Move is likely to reduce level of tax paid here, athough it only paid €3.4m in Irish tax in 2014 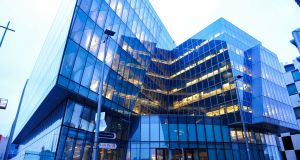 Social media giant Facebook has announced it will stop routing sales from major UK customers through Ireland, in a move which is likely to lead to an increase in tax paid to the British exchequer. The move will reduce taxable profits routed though Ireland, though recent results show that the company has paid little corporation tax here in recent years anyway.

The move comes after widespread criticism of multinational companies’ use of complex tax arrangements to minimise their liabilities.

Facebook said in a statement that the new arrangement — which will start in April — would provide greater “transparency”.

A Facebook spokesman said: “On Monday we will start notifying large UK customers that from the start of April they will receive invoices from Facebook UK and not Facebook Ireland. What this means in practice is that UK sales made directly by our UK team will be booked in the UK, not Ireland. Facebook UK will then record the revenue from these sales.

“In light of changes to tax law in the UK, we felt this change would provide transparency to Facebook’s operations in the UK. The new structure is easier to understand and clearly recognises the value our UK organisation adds to our sales through our highly skilled and growing UK sales team.”

Smaller businesses that use the social network’s online ad buying tools will still be invoiced through Facebook Ireland, which will remain the company’s international headquarters handling all business outside of North America.

There was no guidance from Facebook on how much additional revenue from advertisers can be expected to be routed through the UK or how much more tax the company will pay to HM Revenue & Customs as a result of the move. The scale of the additional payment, which may run into millions of pounds, will not be known until official accounts are published in 2017.

Smaller advertisers who deal with sales staff based in Ireland will continue to receive invoices from Ireland.

Facebook attracted criticism in the UK after its results for 2014 showed it paid £4,327 corporation tax, which is charged at 20 per cent on taxable profits. The company’s accounts recorded UK revenues totalling £105 million. But they showed it made an accounting loss of £28.5 million in Britain, after it more than doubled its staff share bonus pot to £35.4 million.

Facebook’s payment of £4,327 was less than a single UK worker on an average salary would have paid in income tax and national insurance.

Revenue at Facebook Ireland rose to €4.8 billion in 2014, but the company paid only €3.4 million in tax, its accounts have revealed.