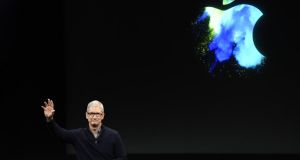 Apple, headed by Tim Cook, says it intends to fund the payment resulting from the European Commission judgment “out of foreign cash”. Photograph: Bloomberg

Apple believes that any extra tax it pays in Ireland as a result of the recent European Commission judgment would be offset by less tax paid in the United States, according to filings made with the company’s latest financial results. The statement will increase tensions between the commission and the US over the controversial ruling, as it indicates that any cash gain for Ireland – or other EU countries – would be directly offset by less tax paid in the US.

Filings with the company’s results say it intends to meet the tax demand which will be made on it by Ireland following the ruling, placing the money in an escrow account pending the legal appeal process which is likely to last some years. The commission estimated that the bill could be €13 billion plus interest, but contacts are continuing between it and the Revenue Commissioners on how exactly the amount will be calculated.

Apple says it intends to fund the payment “out of foreign cash”. It has a large offshore cash pile held by foreign subsidiaries, estimated at end 2014 at $137 billion (€125 billion), according to the filing.

“Amounts held by foreign subsidiaries are generally subject to US income taxation on repatriation to the US,” it says.

“Substantially all of the company’s undistributed international earnings intended to be indefinitely reinvested in operations outside the US were generated by subsidiaries organised in Ireland, which has a statutory tax rate of 12.5 per cent,” the Apple filing said.

It has made provision for tax payments for some of its overseas earnings, but not the portion it plans to reinvest overseas. Under current US tax rules this money only becomes liable to US tax when it is returned to the US.

Apple says it believes that “that any incremental Irish corporate income taxes potentially due would be creditable against US taxes.”

This suggests it believes it can get a reduction on US tax on the portion of its earnings it plans to repatriate to the US. This money would then become liable to US corporation profits tax at 35 per cent. It would effectively seek a write-off of some tax due in the US on the basis of any additional bill paid in Ireland.

The direct link between the commission judgment and the amount of tax the company would pay in US taxes is likely to stiffen US criticism of the judgment. The US has already accused the commission of unfairly targeting US companies.

1 Economies can be restarted if bold and imaginative choices are made
2 Chicken farmer sues Revenue over failed family business
3 Pricewatch: Coronavirus has given us four categories of shopper
4 Our warped sense of perspective bodes ill for Ireland's economy
5 Will remote working mean an end for the corporate HQ?
Real news has value SUBSCRIBE