Sales of books, newspapers and stationery decline 2.3 per cent during the month 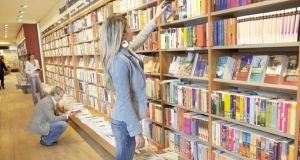 The sector with the largest monthly decrease in November was books, newspapers and stationary, where sales fell by 2.3 per cent. Photo: Getty images

The volume of retail sales rose by increased by 0.2 per cent in November when compared with October 2014, and were up 4.7 per cent on an annual basis, according to new figures from the Central Statistics Office (CSO).

According to the CSO, the sector with the largest monthly decrease in November was books, newspapers and stationery, where sales fell by 2.3 per cent.

Conversely, the sectors with the largest monthly increases were electrical goods, which rose 2.6 per cent, clothing, footwear & textiles (up 2.2 per cent), and department stores (up 1.6 per cent).

“Although there is still a general air of caution among consumers, there seems to be a view that the worst is over following the downturn of recent years,” he said.

Retail Ireland director Thomas Burke said heavy discounting remains a prominent feature of the market, with the value of sales increasing by less than half that of the volume of sales.

“Not all retailers are benefitting from the positive trends, with specialist outlets such as butchers, bakeries and off licences seeing a combined fall of 1.9 per cent in the value of their sales, while the pharmacy category recorded a drop of 0.8 per cent in its sales values,” he added.

The Organisation for Economic Cooperation and Development Thursday said the annual rate of inflation in its 34 members slowed to 1.7 per cent when food and energy are excluded.

In the Euro zone, annual inflation slowed slightly to 0.3 per cent in November 2014. Inflation excluding food and energy was stable at 0.7 per cent.