Win or lose, are you lucky or shrewd?

Recent polls shows that people put good returns down to skill while bad ones are blamed on bad luck. But now there are calls for a more scientific approach 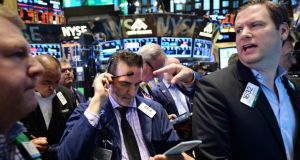 Traders work on the floor of the New York Stock Exchange: Research indicates that returns are usually dictated more by chance than skill. Photograph: Justin Lane/EPA

Does luck trump skill in investment. Research indicates that returns are usually dictated more by chance than skill, and it’s hard to tell the difference between a good investor and a lucky one.

Christened the “greatest money manager of our time” by Fortune magazine in 2006, it all went wrong in 2008, when his shareholdings lost 55 of their value. By the time Miller announced his retirement in late 2011, his fund’s assets had fallen from $20.1bn to $2.8bn, having underperformed markets for five of the six previous years.

Was Miller’s winning streak a product of dumb luck? Was he unlucky at the end of his career? Might it have been a bit of both? How do we know which money managers have been skilful, and which ones have been lucky?

“If you ask a bunch of people to flip coins, maybe one out of a thousand will flip heads 20 times in a row,” says indexing guru John Bogle. “In our business, we’ll declare him a genius.”

In one study analysing 3,156 funds over the 1984-2006 period, Fama found that overall, actively managed funds underperformed markets. Only a tiny percentage – about 2 per cent – delivered results outside what could be expected by chance. Investors could profit by picking such funds, but there was one problem – the good funds were “indistinguishable from the lucky bad funds”. There was no way of telling for sure if the managers in question were highly skilled or lucky.

The higher recent returns were, the more they agreed with the statement. The poorer their returns, the less inclined they were to agree. In other words, good returns are the product of skill; bad returns are a case of bad luck.

If self-attribution bias is a problem, so is outcome bias. Many business books, for example, select a handful of top-performing companies and then look for secrets to their success.

There is the “delusion of absolute performance”; a company’s success, he notes, is down to what competitors do as well as the company itself. A firm might do everything right and still fail. Additionally, business gurus tend to mistake correlation for causation.

The same problems are explored in a provocative 2009 paper called Are ‘Great’ Companies Just Lucky? Evaluating 287 allegedly high-performing companies detailed in 13 major business books, the researchers found only about one in four was likely to be remarkable. The rest “were indistinguishable from mediocre firms catching lucky breaks”. Success gurus “are simply imposing patterns on random data. That’s not science – it’s astrology”.

Even if a company is great, of course, it doesn’t mean it is a great stock. A study of Fortune’s most admired companies, for example, found those with the worst ratings went on to earn better returns than the most admired firms.

Investors, warns money manager and behavioural finance expert Michael Mauboussin, are prone to a “creeping determinism”, the belief that what happened was the only thing that could have happened. “When you see effects that are the consequence of luck, you misattribute them to skill,” he says. It is a “very natural human reaction, but leads to faulty thinking in many instances”.

Of course, no one knew anything about Bolton in 1979. Investment consultant and Smart Investing author Tim Hale gives the example of an investor who decided to bet on Bolton in 1989, by which time his outperformance was widely known. Three years later, that investor would have lagged the market by about 45 per cent. In 1996, Bolton was nearly level with the market, before falling back significantly in 1997 and 1998.

Not until 2000 did Bolton finally edge ahead of the market. “Eleven years of uncertainty – would you really have had the stomach to see this through?” asks Hale.

Michael Mauboussin suggests one test to help determine if there is any skill in an activity – just ask if you can lose on purpose.

“If you can lose on purpose, then there is some sort of skill. Investing is very interesting because it is difficult to build a portfolio that does a lot better than the benchmark.

“But it is also very hard, given the parameters, to build a portfolio that does a lot worse than the benchmark. What that tells you is that investing is far over to the luck side of the continuum.”

While dwelling on investment winners is problematic, given the unknown role of luck, a strong argument can be made for analysing the behaviour of consistent losers.

Even before expenses were deducted, 89 per cent of investors exhibited “negative skill”.

They underperformed by 7.5 per cent annually, the study found, or 8.5 per cent after fees. Other studies have reached similar findings, ordinary investors typically dooming themselves due to overtrading of expensive glamour stocks.

In 1948, Graham, who normally preached the values of diversification, put around 20 per cent of his funds into insurer Geico.

The stock’s subsequent appreciation meant it began to look expensive by Graham’s criteria, but he never sold it. Graham broke all his own rules, and was rewarded for doing so – as the years passed, his Geico shareholding appreciated in value from some $700,000 (€513k) to over $1bn (€0.73bn).

That single purchase yielded more profits than the total of all other investments made over his lengthy career.

The moral? As Graham himself admitted: “One lucky break, or one supremely shrewd decision – can we tell them apart? – may count for more than a lifetime of journeyman efforts.”

1 How to gift your child a house deposit . . . tax free
2 BOI customers to be charged twice with bank fees on New Year’s Eve
3 City of London makes late scramble to limit Brexit disruption
4 Ryanair warns it may reduce more services and relocate operations
5 Irish start-up which developed facial recognition for cows raising over $50m
6 Coveney says Greencore business ‘absolutely smashed’ by Covid-19
7 Irish designer of Oxford vaccine: ‘I’ve never worked so hard in my life’
8 We continue to ignore massive pensions elephant in the room
9 Workers have little idea of the cost of retirement income
10 Son putting elderly dad under pressure to sign over land
Real news has value SUBSCRIBE
Save money on international transfers