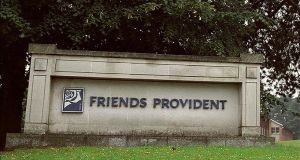 I have 200 shares in Friends Provident that were granted some years ago to persons holding life policies with them. I did receive annual dividend cheques ranging from €6 to €12 but they stopped a number of years ago and I have heard nothing in quite a while.

I still have the share certificate and was wondering if they have any value now and if so how can I cash them in.

When you say these dividends stopped a number of years ago, you’re not kidding. It was likely back in 2009 by my understanding.

Friends Provident was originally a mutual insurance business, which is to say it was owned by its members – effectively those who held policies with the company.

In 2001, the company decided to demutualise and then list on the London Stock Exchange. As part of this exercise, you and the rest of the group’s customers received shares to reflect your part ownership of the business in its former mutual status. The shares launched at 229 pence sterling.

However, in 2009, a private investment group called Resolution, which specialised in buying smaller insurance companies, acquired Friends Provident in a deal worth £1.86 billion sterling.

However, to accommodate the roughly 700,000 small “retail” shareholders who held less than 2,500 shares each in the business – people like you who had received their shares when the company demutualised – Resolution offered to pay cash of 79.4p sterling per share up to a maximum aggregate cash payout of £500 million.

As the price suggests, the company’s value had fallen a long way from the 229p flotation price.

I’m guessing you didn’t choose this option which probably means you became an owner of Resolution shares by default.

The listed company Resolution – not to be confused with the private parent company of the same name – was renamed Friends Life in 2014. At that time, shares in Resolution were trading 9 per cent lower than they had at the company’s flotation despite the FTSE100 index nearly doubling in value over the same period.

Later that year, Friends Life was itself bought by listed insurance giant Aviva in a deal worth £5.6 billion, one of the largest insurance mergers at the time. The deal, which saw Friends Life shareholders receive 0.74 of a share in Aviva for every share held in Friends Life, closed in April 2015, with investors getting their new Aviva shares towards the latter part of that month. They also received a final “second interim” dividend from Friends Life of 24.1p sterling per share.

If you take your 200 shares, which were worth £458 on flotation at 229p a share, they would have had a cash value of £158.80 at the time of the Resolution takeover. The default share-based payment would have seen your 200 Friends Provident shares become 180 shares in Resolution Ltd.

However, the fortunes of the shares would have improved with the subsequent Aviva deal, which would have seen your 180 Resolution (now Friends Life) shares exchanged for 133 shares in Aviva. At current stock market trading, those 133 shares are worth around £590 sterling.

Importantly, while dividends in Friends Provident would clearly have stopped with the sale of that business to Resolution, the new owners themselves paid dividends rising from just over 4p sterling per share in 2009 to just under 22p a share in 2014. Aviva, for its part, also pays dividends on its shares – around 21p a share in 2015.

So what does all this mean for you. A couple of things really. First up, you need to check and make sure you did not receive a cash payment at the time of the Resolution deal. If not, you presumably now own Aviva shares. It is likely you will have to go through the share registrars of the various companies to check if you are on the share registrar.

You might start with Aviva’s registrar, Computershare, to see if you are listed as a current shareholder. If not, you need to go back through the registrars for Resolution/Friends Life, which I gather was also Computershare, or for Friends Provident, which was a UK-based company called Equiniti.

Once you track down your shareholding, you can set about trying to sell the shares – but not till then.

The options are: (a) that you received money back in 2008/09; (b) that you retained shares in successive takeovers and are now an Aviva shareholder; (c) there is a payment due to you from 2008/09 which was not paid because the registrars could not contact you.

This brings me to the second learning. There really is no point people investing in shares if they are not going to keep track of things. With the internet, it is ridiculously easy to get regular updates on events involving companies in which you are invested and major changes in companies of interest to most Irish shareholders are generally reported in our business pages – as the Resolution deal for Friends Provident was.

If you have heard and/or received nothing in relation to this investment over many years, it is likely that the share registrars do not have your current details on file.

Quite why that would be, you’d need to check with them but, certainly, if you’ve moved house, you will need to have notified them. In my experience, share registrars tend to fall off the list of necessary contact updates in such circumstances. With most registrars having user-friendly websites these days, it is now much easier to ensure your details are up to date.