Stocktake: Contested US election the biggest worry for investors 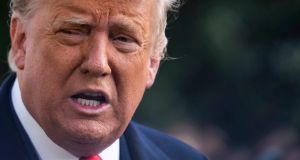 Donald Trump ‘knows what awaits him once he relinquishes the presidency’. Photograph: Sarah Silbiger/Getty

Analysts may be divided as to what US election result is best for markets, but most agree that one outcome is best avoided – a contested election.

Bank of America’s October monthly fund manager survey found that 74 per cent believed a contested election posed the biggest risk to equities. Following the Bush-Gore battle in 2000, the S&P 500 fell more than 8 per cent between the election and December 15th, when George W Bush was finally declared the winner. Of course, a vicious bear market had already begun nine months earlier, so that bout of turmoil cannot be blamed solely on election uncertainty.

Nevertheless, one can see why investors are nervous. There is obvious potential for things to get messy. Trump has given no indication he is willing to accept a loss, recently tweeting this will be “the most corrupt Election in American History!”

Trump may well be leading on election night only for Biden to take the lead when postal votes are counted (more Democrats than Republicans have requested mail-in ballots), prompting the US president to lash out.

Many hope this can be avoided via a decisive Biden victory, but Ritholtz Wealth Management’s Josh Brown is not optimistic. “On what planet would any result be decisive enough for the current resident of the White House to calmly concede and walk away?” asks Brown. “No result would be decisive enough.

“Because he knows what awaits him once he relinquishes the presidency. So the lawsuits, the allegations, the threats, the protests that hopefully remain peaceful – it’s all still ahead of us.”

8 Salesforce insists it is a force to be reckoned with