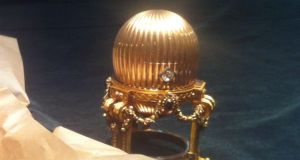 Undated handout photo issued by Wartski of a Third Imperial Faberge Easter Egg made for Russian royalty that was bought by a scrap metal dealer at a US bric-a-brac market, the egg is ultra-rare and worth around £20 million. P hotograph: Wartski/PA

A scrap metal dealer who bought a golden egg at a US bric-a-brac market discovered it is an ultra-rare Faberge egg worth around $33 million (€24 million).

But the striking object was saved from the melting pot because no-one recognised its potential by offering him more than he paid for it.

The egg became a financial burden to its owner who was unaware that it was a magnificent Third Imperial Faberge Easter Egg made for Russian royalty.

The egg, which contains a Vacheron Constantin watch inside it, sits on a jewelled gold stand and was given by Alexander III to his wife Empress Maria Feodorovna in Easter 1887.

In despair one evening, the owner tapped “egg” and “Vacheron Constantin” into Google and a newspaper article emerged about its background.

Unable to sleep for days after recognising the egg as his, the owner flew to London to show images of it to Mr McCarthy who was left speechless. To confirm it was not a fake, Mr McCarthy flew to the small Midwest town where the owner lived so he could be sure the egg was genuine.

When Mr McCarthy saw it on the owner’s kitchen table beside some cupcakes, he confirmed it was the lost Imperial treasure. Wartski bought the egg for a private collector who has allowed it to be displayed for four days at an exhibition at Wartski in London from April 14th.

Mr McCarthy said: “It’s the most incredible discovery. We have so many discoveries but none of them are as momentous as this. “It has travelled from Imperial St Petersburg to the rust belt of America. It’s a story that deserves to be told because it could so easily have slipped away.

“For the Faberge community and the historical community, it is a wondrous event because the Easter egg is the ultimate target for every antique dealer and every enthusiast.” He added: “It may never be seen again and it may disappear into the deepest, darkest vaults of a collector somewhere.”

The egg was last seen in public in March 1902 when it was shown at an exhibition of the Russian Imperial family’s Faberge collection in St Petersburg. In the turmoil of the Russian revolution, the Bolsheviks confiscated the valuable egg from the empress.

It was recorded in Moscow in 1922 when the Soviets decided to sell it as part of their policy of turning “treasures into tractors”. Its fate afterwards was unknown and it was long feared that it could have been melted down for its gold value and lost forever.

But in 2011 Faberge researchers found the egg had been sold in New York in March 1964 for just $1,500 at the time. It followed the discovery of an old Parke-Bernet catalogue, and it was sold as a “gold watch in egg form case” without its provenance being known. The revelation sparked a worldwide race to discover its whereabouts, which ultimately led to the scrap metal dealer in America’s Midwest.

1 Qatar Airways got €1.7bn government lifeline after losses widened
2 Ten of the most mysterious aircraft disappearances
3 Chris Johns: Boohoo exposed on pay and conditions in digital economy
4 Hotel bookings collapse in wake of additional Covid restrictions
5 Estée Lauder staff at Dublin airport plan further strike action
6 Staff to work from home for rest of year, 40% of bosses say
7 Eir decides against passing on VAT reduction to customers
8 Thinking time: Why it should be essential in every workplace
9 How Tony Buzan used mind maps to doodle his way to millions
10 Ocean says it has finished trials on power-generating prototype
Real news has value SUBSCRIBE
Save money on international transfers