Psychology of investors who tend to trade too much 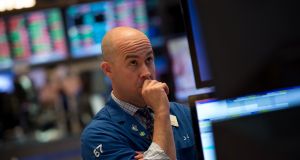 A trader on the floor at the closing bell of the Dow Industrial Average at the New York Stock Exchange: a range of studies have cast light on the drive and personality of traders. Photograph: Bryan R Smith/AFP/Getty

Ordinary investors badly underperform stock markets for a multitude of reasons. The biggest sin of all, though, is surely investors’ tendency to over-trade. How much money does over-trading cost investors, and what are the factors driving this counter-productive behaviour?

The best-known researchers in this field are behavioural finance experts Brad Barber and Terrance Odean, whose examination of more than 66,000 trading accounts at a US brokerage led them to conclude that “those who trade the most are hurt the most” – the most active clients underperformed the least active by more than 7 percentage points annually. The main reason was trading costs such as commissions and bid-ask spread; even the best stock pickers have trouble covering transaction costs, they noted. Over-trading is an even bigger problem in Taiwan, according to the same researchers; there, investor losses are equivalent to 2.2 per cent of Taiwan’s gross domestic product (GDP).

European data is similarly dispiriting, one study finding investors at a Swedish discount brokerage typically underperformed the market by about 8.5 per cent annually. About half of this underperformance was attributed to trading costs. What about the other half? Even before costs, ordinary investors tend to screw up. Data from the US, Asia and Europe all confirms they have an uncanny ability to buy the wrong stocks. This “perverse” trading ability, as Barber and Odean put it, means the stocks they buy typically do worse than the stocks they sell.

Who Trades Profusely? The Characteristics of Individual Investors who Trade Frequently,

In Finland, for example, fast drivers are more likely to be fast traders, with research confirming that frequent traders were more likely to have been fined for speeding. A separate study examining investor behaviour in Germany found “entertainment-driven” clients traded twice as much as clients who were investing for profits rather than pleasure.

US research shows an increase in lottery jackpots is linked to a reduction in stock market activity by small traders, with this effect most pronounced among lottery-like stocks (that is, low-priced, volatile stocks). The connection between lotteries and stock market activity is even more obvious in Taiwan, where trading activity plummeted by a quarter when a government-sponsored lottery was introduced in 2002. More recent Taiwanese data shows this substitution effect remains alive and well, with trading volumes declining when lottery jackpots hit unusually high levels. As in the US, the most volatile small-cap stocks – that is, lottery stocks more likely to be traded by individual investors rather than institutional investors – register the biggest declines in trading volumes.

One Swedish study, for example, found the most frequent traders had lower incomes, less wealth and less education, indicating trading losses are “mainly borne by those who can least afford them”. The same picture emerges from US research. One study found clients with less wealth, minority groups and even the elderly are most likely to engage in excessive trading. Another study, Who Gambles in the Stock Market?, noted lottery purchases are influenced by “socio-economic and psychological factors”. Although some people buy lottery tickets for entertainment purposes, research suggests poor people are more influenced by a strong desire to escape poverty and to rise in social status.

Might these same factors drive investment in lottery-like stocks, the researchers wondered? Short answer: yes. Such stocks are most popular among “poor, young men who live in urban, Republican-dominated regions and belong to specific minority (African-American and Hispanic) and religious (Catholic) groups”, the study found. Furthermore, demand for lottery-type stocks increases during bad economic times.

Investing in lottery-type stocks costs investors roughly 5 per cent of their annual household income, the researchers found. Worse, the poorest investors – those with an annual income of $15,000 or less – experienced an average underperformance of $4,725, almost a third of their annual income. “Investors who are predisposed to playing lotteries also exhibit strong preferences for lottery-type stocks in their investment choices,” the study concluded. “More importantly, and sadly, poor investors, who can least afford to under-perform, incur the largest costs for their gambling-motivated investments.”

If this is to be the last lockdown it has to work 11:14
Aer Lingus urged Government to oppose travel quarantine rules 11:00
Fashion is in a slump, but there are saviours at hand 23 Jan
Fenergo on acquisition trail as revenue and headcount rises 23 Jan
EU shift on travel restrictions would be game changer for airlines such as Ryanair 23 Jan