Family row after mother dies without a will 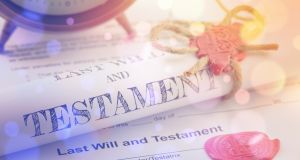 I’ve lived with my mother for the last 15 years and, during that time, she had dementia. I took over paying all the bills in 2009 and the running of the house.

Unfortunately, my mother passed away last October with no will in place. I have seven siblings. Six of them have agreed to me buying the house. I can only get a mortgage for €130,000.

I have a sister who has lived abroad for many years and she is looking for her full share. My five other siblings and I have looked after our mother. Is my sister entitled to her full share even though she never helped out in any way with our mother?

Family disputes over wills – or the absence of wills – are among the most depressing scenarios I come across. That’s in part because they tend to be so intractable and also because it involves people who are already, by the nature of the situation, grieving for someone who has recently died.

That, in itself, does nothing for a dispassionate assessment of needs and intentions. And when rows arise, it’s all too easy to resort to the letter of the law or, where wills are made and disputed, to lawyers – which inevitably means there will be less benefit for everyone at the end of the day.

If a will had been in place, it would be open to you to challenge it if you felt you had not been adequately provided for. As someone living in the family home caring for your mother for 15 years – and without a separate property of your own – the court might consider you were entitled to be provided for, though there’s no guarantee.

However, because no will has been made, the rules of intestacy apply and they are much more rigid.

They state that where someone with children dies and there is no spouse, the estate is divided equally among those children. If one of the children has died, their children share that person’s share.

There is no scope to rule one or more of your mum’s children out of the will, nor is there any provision to give one child (you) a greater portion to reflect your special position and your care for your mother in her final years.

The law of intestacy simply allocates the estate: it is up to the family members to thrash out any variation of that. Some or all could agree to sacrifice some of their share so that you could buy a property but I cannot see any way that your mother’s house would not be sold. It, presumably, accounts for a large part of the estate she left behind.

You should also be aware that, even if your siblings did agree to give some of their inheritance to you to help you secure a home, that could have capital acquisitions tax implications for you. You can only receive a maximum of €32,500 over your lifetime from siblings – that’s between all of them. After that you would have to pay tax on anything extra at 33 per cent.

So, no, you can’t disinherit the sister who is living abroad. She is entitled to her full share regardless of family circumstances as no will is in place. And, even if she could be persuaded to agree to the arrangement where you keep the house, it would almost certainly lead to a tax bill for you.

For all this and more, I cannot stress enough the importance of making a will.

The whole concept appears to fill people with dread. I’m not sure whether that is because of some misplaced fear about the complexity involved or a sense of terror at the premonition of one’s mortality but it really is irresponsible nonsense either way.

Your position shows precisely why. For whatever reason, people put off making a will on the basis that there will always be time for it down the line. But a catastrophic health event – such as a stroke or heart attack, or, as in your case, the onset of dementia – can rob a person of the capacity to put their intentions down on paper, and then it is too late.

While I would always advise people to consult a lawyer in relation to wills – if only to ensure that the language used is not ambiguous and results in the allocation of assets other than in the way intended – it is perfectly possible to draw up a will at home.

All you need is to ensure that it is in writing, that it is signed and that it is countersigned by two witnesses – neither of whom can benefit under the will.

It should include the name and address of the person making the will (as in, I, John Doe, of Park Lawn, Cork) as well as a clause revoking any former wills or additions to previous wills, known as codicils. It’s worth doing this even if you don’t believe you have any outstanding will, just in case one has slipped your mind.

You then need to appoint executors, the people who will be responsible for dealing with your estate after your death – gathering your assets, paying off any debts and distributing remaining assets in accordance with your wishes. Ideally you should have two executors, just in case one is unable to perform their duties because they are ill (or die before you), or have moved away.

Make sure you check with these people that they are willing and able to carry out the role of executor.

You then need to include a list of any specific goods, property or money you want to leave to specific people – like a beloved family member or friend. It might even be a long-serving carer or gardener.

After that, you need to say what you want to happen to what’s left of your estate – the residuary portion. Normally this would be divided in portions to family.

For instance, in your case, a simple will might have said that you were to receive the house and that any remaining value in the estate would be distributed evenly between your siblings.

There is, however, no obligation to provide for or leave anything to an adult child, unless they are a dependent.

*Finally, as I said, you need to sign (and date) the will. This must be done in the presence of the two witnesses who also sign after you.

I really would urge people not to put it off any longer but to ensure they have at least a basic will in place. As your story shows, it can avoid a lot of bitterness, heartache and personal hardship later on.

* This copy was edited on August 15th