Can the FTSE shrug off election uncertainty?

UK stocks have performed better under Conservative governments, but studies indicate that investors need not lose sleep over a changing of the guard in Downing Street 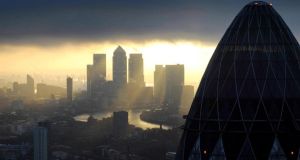 British voters go to the polls on Thursday in an election that remains too close to call. Should investors be nervous? Would a Labour-led government be bad for stocks, as some commentators argue? Or should investors ignore the nervous Nellies and simply stick to their long-term plans, irrespective of who wins the election?

There is no shortage of commentators warning of dire scenarios. “Wake up, investors: this election will cause chaos in the financial markets”, the Telegraph headlined in March. A month later, the same warning from the same paper: “General election to spark stock market chaos”.

Far from being chaotic, the UK market has been relatively calm in recent months. Nevertheless, many investment managers and analysts are on edge. Online investment manager Nutmeg, for example, recently reduced its FTSE 100 investments by a third, saying it might take many weeks for a government to be formed, something that “will only add more fuel to speculation and nervousness in financial markets”.

Meanwhile, an Interactive Investor online poll of more than 11,000 found that more than 20 per cent had already rejigged their portfolio in advance of the election, and another 30 per cent were waiting for the results before deciding on any changes.

In other words, half the investor population is ignoring the election; the other half is anxiously awaiting the results.

Others point to a recent report from Hargreaves Lansdown analyst Laith Khalaf, which found that over the past 45 years, shares averaged annual returns of 16 per cent under the Conservatives compared with just 9 per cent under Labour.

Khalaf notes that stocks rose 20-fold during the Conservatives’ 18-year reign between 1979 and 1997. In contrast, the stock market nearly halved during the last minority Labour government, between February and October 1974.

However, the report also rightly warns that investors should be wary of extrapolating too much from a handful of cases. The 1974 market collapse took place at a time of global recession, with UK inflation running at 20 per cent and oil prices quadrupling as a result of Opec’s oil embargo.

It doesn’t make sense to pin the market collapse on the political uncertainty of a hung parliament. After all, uncertainty remained even after the October 1974 election, when Labour under Harold Wilson crept into power with a majority of just three seats. That majority was gone by 1977, forcing Labour into deals with the Liberals, the Ulster Unionists, the Scottish National Party and Plaid Cymru.

Clearly, stocks were being driven by factors other than politics. Stocks were trading at just four times earnings at the end of the savage 1973-74 bear market, before rebounding to a more normal multiple (12) in 1979.

Similarly, the gains under Thatcher and John Major were replicated internationally, with US stocks doing equally as well during that period. Indeed, that same secular bull market continued under Tony Blair, with stocks gaining more than 30 per cent in the 12 months following his 1997 election win.

By early 2000, global indices were trading at unsustainable valuations, ensuring the next decade would be a miserable one for investors everywhere, whether they lived in Blair’s Britain or George W Bush’s America.

One study of European elections over the 1990-2012 period confirmed that volatility does rise around elections. However, while stocks tended to rise in a number of countries in the weeks running up to elections and fall soon after, the exact opposite pattern was seen in a number of other countries.

As for political orientation dictating long-term stock returns, the US experience differs from the UK, with stocks doing more than twice as well in Democrat presidencies over the past century than under Republican ones. Again, the same caveats apply: correlation does not imply causation.

In one major study, Political Orientation of Government and Stock Market Returns, researchers analysed 24 stock markets under 173 different governments. There was no obvious difference between stock performance during right-leaning and left-leaning administrations.

“International investment strategies based on the political orientation of countries’ leadership are likely to be futile”, the study concluded.

That same calm is obvious today. Despite huge uncertainty about the make-up of the next government, the FTSE 100 and the FTSE 250 have been hovering near all-time highs, up 8 and 10 per cent, respectively.

Obviously, this time may still prove different. Markets hate uncertainty, and uncertainty abounds at the moment. The polls are too close to call, and any number of coalition options could result. A “soothing outcome” is hard to imagine, Blackrock warned recently, citing Conservative plans to hold a referendum on Britain’s EU membership and Labour being “tough on business”.

Thirdly, the FTSE 100 is now dominated by multinationals largely immune to British economic developments. Some 70 per cent of earnings come from outside the UK; 22 FTSE 100 companies actually report their earnings in dollars.

Additionally, and crucially, UK stocks appear inexpensive, having worked off their dotcom excess by trading sideways over the past 15 years. Stocks trade on a cyclically adjusted price-earnings ratio (Cape) of 15, slightly below average levels. Compared with the rest of the world, Ian Harnett of Absolute Strategy Research noted recently, UK valuations are at a 25-year low.

In short, forecasting market movements on the basis of political prognostications is a dangerous game. Just think back to March 6th, 2009, when a Wall Street Journal op-ed by Stanford economist and former George W Bush adviser Michael Boskin warned that “Obama’s radicalism is killing the Dow”.

In truth, stocks were collapsing all over the world due to the apocalyptic financial environment. It had nothing to do with a centrist president who had been in power for less than two months. Dirt-cheap valuations meant a major market bottom was just days away; stocks have more than tripled since then.

British stocks are not dirt cheap today, but nor are they expensive. That suggests long-term UK returns are likely to be in line with historical norms – whoever is in power.

1 Fianna Fáil may have just pressed the pause button on the property market
2 UK to prioritise EU trade deal over one with United States
3 Who are Ireland’s 17 billionaires?
4 State ranked highly for attracting skilled workers but low on gender issues
5 My father in a nursing home wants to gift me his house
6 Are there annual limits on inheritances or gifts to a child?
7 London fintech company Nuroco to expand here
8 CVC must reveal Six Nations interest before Pro14 bid
9 Eason puts Blanchardstown store on market at €16m
10 Belfast regeneration project worth £500m gets green light
Real news has value SUBSCRIBE
Save money on international transfers