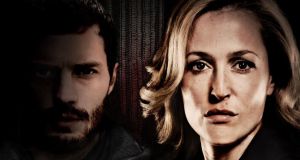 Knowing you have to wait a year for a television cliffhanger to resolve itself can be frustrating for viewers, especially when – as with serial killer thriller The Fall – the audience had been expecting everything to wrap up neatly at the end.

“No, it wasn’t a bid to get recommissioned,” The Fall’s writer Allan Cubitt said of the open-ended final scenes of the Belfast-set drama’s first run, which left all its loose ends untied. Speaking at the Mountains to Sea book festival in Dún Laoghaire, he said he had always planned for the “whydunnit” to be 12-hours not long, not five.

Unsatisfying
“In the end, the BBC said, ‘Great, you can do it, but you can only have five hours’. I said I didn’t think I could tell the story I wanted to tell in five, and they said, ‘Okay, you don’t have to close it’,” Cubitt said in conversation with Irish script editor Rachel O’Flanagan.

The Fall wasn’t recommissioned by BBC Two until after the second episode aired and the series sustained its initial ratings success.

That meant there was a risk that its police detective heroine, DSI Stella Gibson (Gillian Anderson), would never get a chance to go round two with the murderer, and viewers loyal to the show would have been left with an unsatisfying – if realistic – ending.

“The commissioners are now very wary of cliffhangers,” said novelist- turned-screenwriter Ben Richards, who experienced the pain of finishing his series Outcasts on a cliffhanger, only for the low-rating science fiction drama to be axed.

Richards, who is working on The Tunnel, Sky’s Anglo-French remake of Scandinavian crime drama The Bridge, cited the end of the first series of Spooks (the spy thriller for which he later wrote) as an example of an effective cliffhanger that might not make it on screen today. In the episode’s final minutes, a bomb ticks down in the house of MI5 officer Tom Quinn (Matthew Macfadyen) with his girlfriend and her daughter trapped inside.

“I think they would be very wary of letting that happen again, because audiences get very angry when cliffhangers are not resolved.”

With broadcasters under intense commercial pressure in a now multi-platform industry, a drama that doesn’t perform in terms of ratings has little chance of returning – so too bad if you count among its appreciative but all-too-niche following.

‘Homeland’
But whether or not a series returns shouldn’t always be seen as a benchmark of a show’s success, said Richards. Those commissioning programmes sometimes green-light episodes beyond the natural screen life of a story, in a bid to squeeze every last drop of interest from viewers.

“Homeland should have ended [at the end of series one] when it was Damian Lewis in the suicide vest,” he said.

As for The Fall, Cubitt revealed he is regularly thanked by Irish people for “setting a drama in Belfast that wasn’t about the Troubles”. But viewers have a Sherlock-style wait for the next sighting of killer Paul Spector (Jamie Dornan) – the second series of the British-Irish co-production won’t air on BBC Two and RTÉ One until late 2014.