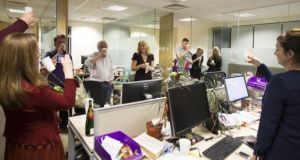 Anne Harris, the editor of The Sunday Independent, received a “knock down” from her staff on Saturday night as she ended her career leading the country’s best-selling newspaper.

A “knock down,” is when journalists bang the tables in a newspaper tradition which dates back to when printers serenaded departing editors by hitting their metal benches with their hammers.

Ms Harris joined the ‘Sindo’ as features editor in 1985 and she was also the deputy editor of the Sunday Independent for two decades.

In a speech to her staff Ms Harris said: “The Sunday Independent captured the public imagination and that is all down to the people assembled in this room and our contributors.”

She is understood to have spoken only about journalists and journalism and not about newspapers and their owners, a subject matter she has previously addressed in several columns.

Ms Harris leaves The Sunday Independent with its circulation rising in recent months year-on-year and the paper’s market share on a Sunday at a record high of over 30 per cent.

The paper’s market share was just under 26 per cent when she took over as editor of the paper from her late husband Aengus Fanning in 2012.

The marketing department of Independent News & Media presented Ms Harris with a painting of “30%” to mark this.

Leslie Buckley, the chairman of INM whose largest shareholder is billionaire Denis O’Brien, thanked Ms Harris for her work with The Sunday Independent in a private meeting last week.

Mr Buckley gave no explanation at this meeting as to why the decision was made not to extend her contract despite her success as an editor for the company.

Eoghan Harris in his column in The Sunday Independent said Ms Harris had helped create a “publishing phenomenon.”

He said she had a “nose for stories,” who was a “bean stuama, meaning a woman of substance - skilful, patient, stoic, steady.”

INM is currently interviewing candidates to replace Ms Harris after she finished her three year contract.

INM is also seeking a new editor of The Irish Independent and is believed to have short-listed two internal candidates for the role.

“A process is under way to appoint new editors to both the Irish Independent and the Sunday Independent. It is expected to be finalised in the coming weeks,” a spokesman for INM said.