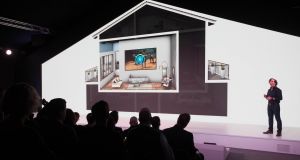 Andrew Olson, director of new products at Sky, speaking on stage at the launch of Sky Q, which is Sky’s next generation home entertainment system. Photograph: David Parry/PA Wire

So what exactly is Sky Q?

If the talk of “fluid viewing” and “reimagining TV” didn’t make it crystal clear, the simple explanation is that Sky Q is Sky’s new entertainment platform. The idea is that you can watch what you want, where you want, when you want. We deliberately say “entertainment” rather than TV, because Sky has been busy signing partnerships to bring content from GQ and GoPro to Techcrunch to the Q platform. Add in some online services such as YouTube and Vevo, and you’ll see where this is going.

Go back a bit. Fluid viewing?

It’s Sky’s way of saying that you can pause your TV on one screen and pick up what you’re viewing on a tablet or TV in another room. Sort of like what Netflix does at the moment. Sky has gone on a whole “set your TV free” trip. Note: this does not mean free of charge, but more on that later.

What do I need to get Sky Q?

You’ll need a whole new set top box to access the new platform. Sky is offering two – Sky Q and Sky Q Silver – that both do essentially the same thing, just with some extras thrown in. The Sky Q box allows you to record three programmes while watching a fourth live; the Sky Q Silver has 12 tuners so you can record four programmes and watch five simultaneously.

On top of that, you have the Sky Q Mini, which is the plug and play extension for your Sky Q box. That means you can put the Mini boxes around the house and bring your Sky subscription to other rooms, no cables required.

With the new set top box is a new remote control with touch controls to scroll through the redesigned user interface and search function.

One feature that we can see getting a lot of use is the remote locator. If you lose the remote from your set top box, push on the front of the box and the box will lead you right to it.

What about my tablet and smartphone?

Sky Q is launching with a tablet app too that will essentially replace Sky Go for subscribers to the Q service. You can use it for viewing TV inside the home and out, and view the ondemand offering from Sky.

In a first for Sky though, it’s also offerin you the chance to sync your recordings from your set top box with your tablet, so you can essentially download them to the tablet and bring them out with you.

That also gets around the geoblocking that t linear TV services are subjected to; once you’ve put it on your tablet you can access it online or off, and you aren’t constrained by borders. The one catch is that you have to choose and sync the recordings before you leave the house – there’s no cloud syncing or storage for this service.

What’s this about wifi hotspots?

If you’re a Sky Broadband customer, you’ll have the Sky Hub in your home, The Sky Q Hub uses powerline network technology to turn your home’s electrical lines into an extension of your broadband network.

That in turn will transform any of the Sky Q Mini boxes you have connected at home into hotspots. Say goodbye to separate powerline adaptor kits.

When is it coming and how much will it cost me?

Sky Q launches early next year – we don’t have an exact date yet – and pricing will be confirmed closer to launch. So in short: we don’t know.