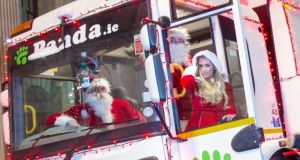 Panda Waste is poised to buy rival Greenstar from US fund Cerberus, according to a report.

Recycling group Panda Waste is poised to buy rival Greenstar from US fund Cerberus, according to the Sunday Times.

The newspaper reported that there had been on-off talks between the parties for some time and a deal was likely in the New Year. Cerberus declined to comment on the news.

Greenstar has a large commercial business and is growing its residential operations. The company has revenue of almost €100 million a year and employs 850 people.

Cerberus bought Greenstar out of receivership in 2014 and has also acquired a number of loan portfolios from the National Asset Management Agency.

One of the deals it did was the controversial Project Eagle northern loan book, which is now being investigated by a Northern Ireland Assembly committee.

Pimco to invest in Finance Ireland

Another firm connected with the Project Eagle row, Pimco, is also reported by the Sunday Times to be about to invest €25 million in Finance Ireland in return for a significant minority stake.

Finance Ireland plans to use the US investment manager’s money to expand into providing commercial property loans to small and medium-sized businesses.

Former banker Billy Kane set up Finance Ireland, which has carved a strong niche in forecourt finance for the motor trade.

It also has a large loan administration arm, managing more than €500 million for another American investor, Carval, and debts sold by Lombard and Friends First.

Number in negative equity falls below 100,000

The number of mortgages in negative equity has fallen to fewer than 100,000 – a plunge of more than two-thirds in three years, the Sunday Business Post reported.

Negative equity peaked in 2012, when more than 315,000 home loans were under water, the newspaper said. However, a rally in property prices, particularly in the Dublin area, has dramatically cut that number.

The Minister for Finance, Michael Noonan, suggested the turnaround should encourage mobility among home-owners and give them confidence to spend money on improvements and maintenance.

Oneview Healthcare, the Dublin-based technology company that specialises in electronic storage of patient records, is planning to launch its shares on the Australian stock exchange next year, according to the Sunday Business Post.

Positive feedback from an exploratory roadshow prompted the move, the newspaper said. It added that an initial public offering of its shares would be likely to value the company at several hundred million euro, although the actual amount raised is likely to be modest.

The company recently raised €10 million in a third funding round from existing investors, which include a number of Australian backers.