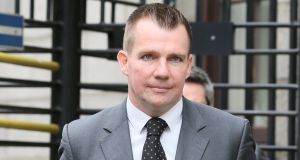 Karl Brophy, founder of Red Flag Consulting: “We’re very pleased at Red Flag with an excellent performance across all our markets in 2015.” Photograph: Collins

Red Flag Consulting, which is being sued by Denis O’Brien for alleged conspiracy and defamation, made an after-tax profit last year of just under €319,000, according to abridged accounts just filed with the companies office.

This brought accumulated profits to €811,447 for a company that was founded by Karl Brophy in 2013 and has offices in Dublin, Brussels, Paris and London.

Mr Brophy told The Irish Times that Red Flag was finalising an employee share scheme that would ensure that its “expert staff share in the success of the company as it, hopefully, expands and grows”.

Commenting on the results, Mr Brophy said: “We’re very pleased at Red Flag with an excellent performance across all our markets in 2015. This allowed us to invest heavily through 2015 and 2016 in our Brussels office, headed by Séamus Conboy who has driven the business excellently.

“We’ve seen significant expansion in activity from existing and new clients in recent months. By the end of 2016 we expect to have 20 staff in Brussels alone and we’re planning on further investment to grow the business through this year and next including in the United States.”

Mr Brophy declined to comment on the legal case with Mr O’Brien. No mention of it is made in the accounts, suggesting that the reported legal bill of €1 million is not affecting the business.

New clients secured by Red Flag since the start of last year have included China Construction Bank, the second-largest bank in the world by market value, North American Meat Institute, which represents 95 per cent of meat producers in the United States, the National Coffee Association, which represents all the major players in the American coffee industry, Elon Musk’s SolarCity, and Irish Distillers, makers of Jameson whiskey.

Red Flag is chaired by Gavin O’Reilly, a former chief executive of Independent News & Media and a son of Sir Anthony O’Reilly.