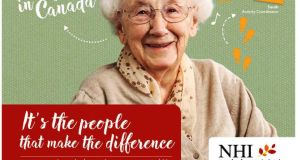 A publicity poster for the Nursing Homes Ireland radio ad campaign by the agency DDFH&B. The message is one of positivity and it highlights the input of carers to residents’ lives.

Nursing Homes Ireland (NHI), the representative group for the private and voluntary nursing homes sector, has embarked on a national radio advertising campaign in the lead-up to Nursing Homes Week 2015. This begins on June 22nd and aspires to be “an annual national celebration of the positivity of nursing home life”.

Featuring two nursing home residents and four carers – Emma, Sarah, Alan and Tony – the radio campaign was developed by advertising agency DDFH&B and is designed to promote the role of staff in nursing homes in helping residents stay active and keep in touch with their families.

Titled “It’s the People that Make the Difference”, the campaign includes two separate ads that are being broadcast more than 240 times across RTÉ Radio 1, Newstalk and 4FM in a three-week period.