Reluctant to fully accept her past, America’s first self-made female billionaire is in little doubt about her brand’s future 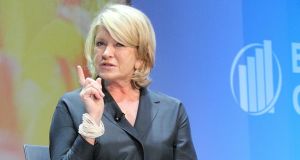 Amid the furore, Martha Stewart is calm. Her hosts most definitely are not.

Her conviction has been the elephant in the room for much of the interview. Earlier, she had referred to the high-profile case obliquely, saying her company is in a rebuilding phase: “We are working on remedying the challenges. The company’s problems stemmed from my personal legal problem. We didn’t lose customers but we lost ground in terms of partnerships.”

While she is willing to discuss the issue, the Ernst and Young executive accompanying her at the event ahead of the EY World Entrepreneur of the Year awards is not.

Tapping away on his smartphone, it takes him several moments to realise the conversation has drifted to events of 2004 and Stewart’s five-month jail sentence. When he does become aware of the conversation, all hell breaks loose and, amid angry shouts, the interview is brought to a halt. Not wanting to end on a sour note, as I am told it will, considering my line of questioning, I ask Martha about her time in Ireland, and what she thinks of American companies locating here for tax reasons.

Despite the over-sensitive minder, who is urging her to leave and repeating that the interview is over, the ever-polite Stewart talks of her love for the Burren and answers that setting up in Ireland for tax purposes is “very smart”.

Throughout our interview, Stewart seemingly has no difficulty addressing the trials and tribulations of her business life to date, from organising kids parties from the age of 10 to her current role as matriarch of a media empire at the age of 72.

She has a reputation for being a “domestic diva”, but in the beautiful surroundings of a top floor suite in Monte Carlo’s Hotel du Paris, she is down-to-earth, funny and extremely likeable.

We are in Monaco for the EY World Entrepreneur of the Year competition, at which Stewart is speaking, and she is excited. Having looked out the hotel room window, she has discovered the flowers on the Place du Casino roundabout below have been cultivated in the shape of the letters “EY”. She grabs her camera and begins snapping away. Baking cakes and preparing hors d’oeuvres for a living may not seem like the stuff on which empires are built but that’s exactly how Stewart became one of the world’s most powerful women, and the first self-made female billionaire in America.

But she considers herself a person in business, not a woman in business. When she floated her company on the New York Stock Exchange in 1999, her advisers said it was unusual working on an IPO for a woman. She disliked being pigeonholed in such a way. “Even my lawyer said ‘I’ve never done this [an IPO] for a woman’.”

Born Martha Kostrya, she developed a love and interest in all things domestic early on in life, helping her parents with the gardening and cooking. A natural-born hostess, she was organising birthday parties for children in her neighbourhood by the age of 10, in an effort to supplement her baby-sitting income.

She began modelling at the age of 15, staring in television ads for companies such as Clairol, ultimately using the money to pay for her college tuition. In 1961, during her second year at Barnard College, she married law student Andrew Stewart.

She continued modelling after graduation, but was restless and seeking a new career. Her father-in-law was a stockbroker and the job intrigued her. In 1967, two years after the birth of her daughter, Stewart joined the Wall Street firm of Pearlberg, Monness, Williams & Sidel. She worked as a stockbroker for seven years and excelled – at one point earning $135,000 (€99k) a year, which at the time was a fortune. When the stock market crashed in 1973, Stewart decided to make the move into catering, setting up her own business. Forty years later, her business has become an empire with television, print and merchandising divisions.

More than 8,500 products bear her name, she has written numerous bestselling books, and her syndicated talk show Martha is broadcast all over the world.

Addressing entrepreneurs in Monaco, she said it was not an easy rise to the top. It was a big risk in the early 1990s when she decided to end her magazine’s association with Time Warner after the publishing giant did not see the value of media tie-ins.

“All entrepreneurs are rebels in one way or another. I was partners with Time. It was the early Nineties. I rebelled against a big corporation and bought my company back. “Time said a TV programme would cannibalise my magazine. And this from a publisher of one of the most powerful magazines in the world. Ultimately there was great synergy between the magazine and the TV programme.”

She is constantly thinking about the customer, and tries out all new products before their launched. “I care more about the customer than anything else. I don’t want people buying a product and saying ‘god damn Martha, this spatula doesn’t work’. I want the spatula to work for a very long time. I made K-Mart discard 400,000 graters. My name was on them. The blades were upside down which was incorrect. The customer would have to turn the grater upside down to use it. I test all my products.”

While she is a household name in the US, her brand stretches far beyond her home country. “I’m on television in 88 countries. When I walk down the streets in Bangkok, they recognise me from the TV. Even in remote parts of China, they have TVs, they know me.”

Her next mission is to introduce her products to China. “I’m very interested in international expansion for our products now. . . we manufacture a tremendous number of our products in China, so it would be good to sell them there too. There has been an exodus from the countryside into the cities. And they all need home products.”

Stewart already has a thriving business in Japan, through a long-standing distribution deal with Seiyu department stores. In order to crack the Japanese market though, she had to redesign her products.

Stewart is a bit of a tech geek and was an early investor in Twitter, which she uses to get public advice on new projects. She has several drones, and believes technology has made business easier, but takes up a lot of people’s time.

“We have 3D printers in our companies now making prototypes of our products. We used to have to send out.

“I have a love hate relationship with my computer. When I first got a computer in 1982, I said this is going to save me so much time. It hasn’t. I spend so much time in front of my computer and devices.”

Sitting at the dining table in the hotel suite, she says her company starting selling online very early, perhaps too early.

“We were early adopters of internet sales. We had a company called Martha by Mail. We stopped that because it was so expensive. I wish we didn’t. It was at a time of crisis for online around 1999/2000. Amazon nearly shut down.”

The highlight of her career? “Visiting Waterford,” she says, bursting into laughter. “I did a helicopter trip through Ireland landing in remote places. I loved the Burren – I spent a day there. I also went to the Galway races and the Aran Islands. I wear the sweaters I got there all the time”.

Stewart is many things – domestic goddess, businesswoman, writer, publisher and TV personality. A slave to fashion though, is one thing she is not.

“I didn’t like the red soles on the bottom of the Louboutins. I used to get a marker and colour the bottom black. Christian Louboutin was not happy with me. I travelled through Finland on a boat with him and he said it.”

She greatly admires Hillary Clinton: “I think she has been a phenomenal success and an icon for us to follow. She survived a horrible, horrible debacle in her life.”

So what is the future of the Martha Stewart brand? “Estée Lauder is now better known than it has ever been and Estée has been dead for a long time. Martha is a brand. I think it’s important to keep that brand alive and well long after Martha”. CV Martha Stewart Name: Martha Stewart Position: Founder and non-executive chairman of Martha Stewart Living Omnimedia Age: 72 Education: BA in European history and architectural history from Barnard College Something that might surprise you: She briefly dated Oscar winning Actor Anthony Hopkins, but broke it off after seeing Silence of the Lambs, because she couldn’t separate him from his famous character Hannibal Lecter. Something you might expect: She cooks everything from scratch and has only once ever ordered in a pizza.