The likes of Dave, Challenge, TLC and E! might seem peripheral, but their share of viewing all adds up 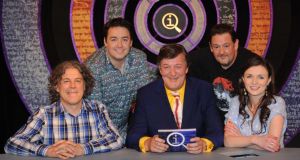 Irish comedian Aisling Bea is among those posing with Stephen Fry, host of the BBC’s QI. In Ireland, repeats of the panel show are the most popular programme on the channel Dave. Photograph: Brian Ritchie

Are you watching Geordie Shore on MTV, Ben and Holly’s Little Kingdom on Nick Jr or extended- length repeats of QI on Dave? Perhaps not.

Back in the nascent cable days of 1992, Bruce Springsteen sang that there were “57 channels and nothin’ on” and it may still seem that way to the casual remote flicker. But the problem for the domestic television industry is that there actually is something on. Some viewers, at least, are tuning in to Challenge to relive the “phone a friend” days on Classic Who Wants to Be a Millionaire or TLC to indulge in Gypsy Brides US, and it is all adding up to something of a headache for Irish broadcasters.

Between them, RTÉ One, TV3, RTÉ Two, 3e, TG4, RTÉ One +1 and Setanta Ireland had less than a 40 per cent share of viewing in August, according to TAM Ireland figures.

Even in June, when RTÉ Two had the substantial benefit of the World Cup, the combined share was 44 per cent.

The autumn season is likely to be going better, thanks to its comparative schedule riches, but it won’t be enough to change the fact that a large chunk of the €200 million television advertising market is leaking out of the Republic.

Obscure or repeats-led channels might get only as much as 0.5 per cent of the available eyeballs but because there are so many of them they serve to chip away at the business of RTÉ and TV3.

And this long tail is a bugbear. RTÉ Television managing director Glen Killane says that of the dozens of overseas advertising “opt-out” channels “35 of them are not contributing anything to the creative sector here”. They take out money but they don’t spend it.

Alone, Sky Media Ireland, the advertising sales wing of BSkyB here, represents no fewer than 33 channels in the Republic. It sells ads that run on the channels it owns, such as Sky 1, Sky Living, Sky News, Sky Atlantic, the various Sky Sports channels, Challenge and Pick, and it also represents the MTVs, Comedy Centrals and Nickelodeons... plus E!, Universal, Discovery, TLC, At the Races, Gold, Alibi, Watch and Dave.

This portfolio has been steadily lengthening in recent years, though the main change in the Irish television market in 2014 was Channel 4’s move to begin formally selling advertising in the Republic on its main channel: previously, advertisers relied on an “overspill” effect from its Northern Ireland sales region.

In two months’ time, the television market will undergo a fundamental change with the launch of UTV Ireland by Belfast-based UTV Media plc. It is not uncommon to hear people in the Irish television market talk about UTV Media in hushed tones, partly in deference to the company’s track record of making money and partly in fear at the potential impact of the new channel.

With exclusive rights to soap opera “bankers” and a raft of other shows – as well as the potential draw of its news, current affairs and Pat Kenny-flavoured output – the Republic-focused UTV Ireland will make for an entirely different competitor than its long-established “northern service”.

Its aim is to grow to a double-digit audience share and become the second most-watched channel in Ireland, behind RTÉ One – scary stuff for the media group it plans to overtake, TV3.

But for RTÉ, UTV Ireland’s arrival comes at an especially awkward juncture, too, as the money it will take from the market is expected to cancel out recent uplifts in the advertising revenue coffers, leaving the national broadcaster just as dependent as ever on licence fee revenue that continues to diminish.

A review of the advertising market by consultants Indecon is due to be published soon. But what can it possibly say that will change anything? In truth, there is very little anyone can do about the border- crossing television companies putting the squeeze on RTÉ and TV3.

BSkyB is a major employer that has helped its brand by making forays into Irish or Ireland-based production. The creation of 120 jobs at UTV Ireland is itself an army by media sector standards – even if its ultimate impact is to trigger job losses at RTÉ and TV3, it is difficult for the Government to lament it publicly.

And with pay-TV providers Sky and UPC dominating the platform market, those oddly named channels stuffing the upper ends of the electronic programme guides with their ultra-quirky lifestyle shows and the screen hits of yesteryear aren’t going anywhere in a hurry either. As long as someone watches them, some companies will advertise on them. Never underestimate the influence of Dave.

1 Brexit: System agreed for Irish goods to skip checks on UK trade
2 High Court appoints interim examiner to Compu b parent company
3 Second Covid-19 outbreak and no-deal Brexit an appalling vista
4 David McCullagh announced as co-host of RTÉ Six One News
5 Why are markets booming when a crash is on the way?
6 How much do Irish people earn? And what will Covid-19 do to our wages?
7 Ireland faces 'deep downturn' this year and may not rebound until 2024 if there is a second wave
8 Rosslare Europort in line for €30m upgrade from Irish Rail
9 ‘The rental situation stops me moving back home’
10 Could your old car be giving away all your secrets to its new owner?
Real news has value SUBSCRIBE