Johnston Press sells its 14 titles in the Republic

‘Limerick Leader’ and ‘Kilkenny People’ among publications sold to Iconic Newspapers for €8.7m 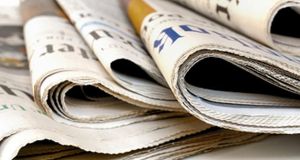 The Johnston Press media group has sold its 14 newspaper titles in the Republic to Iconic Newspapers Ltd, a company run by British advertising executive Malcolm Denmark.

The debt-laden Johnston Press, which owns more than 250 publications across Britain and Ireland, has entered into an agreement to titles including the Limerick Leader, the Kilkenny People and the Donegal Democrat to Mr Denmark’s company following months of negotiations. Mr Denmark has suggested that he will invest in the titles.

The Edinburgh-headquartered regional publisher, which is listed on the London Stock Exchange, confirmed that the price of the deal was £7.2 million (€8.7 million) in cash.

The figure is just a fraction of the sums Johnston Press spent on buying the newspapers during the boom. In 2005, it spent €139 million on the Leinster Leader group of titles alone, while its total outlay in Ireland arrived at more than €200 million.

A collapse in advertising revenues since then has sharply reduced the value of regional newspapers. The parent company, which last week announced a group-wide loss of £287 million for 2013, took an impairment charge of £13.8 million (€16.7 million) last year on the value of its titles in the Republic. However, the business managed to record an operating profit of €1.3 million in 2013, as it continued its cost-cutting programme.

The assets of the Naas-based Johnston Press Ireland, as well as employee contracts, were transferred to a new entity, Formpress Publishing Ltd, last month ahead of the sale. Staff were told this would not affect their terms and conditions.

Johnston Press said it would continue to provide printing facilities to Iconic Newspapers “for a certain period” after the sale. It also intends to sub-lease some of its leasehold properties to the new owner of Formpress. The company is retaining its Northern Irish titles including the Newsletter and Derry Journal (which are also sold in the Republic).

Iconic Newspapers belongs to the same corporate group as Mediaforce, which is the Johnston Press’s national advertisement sales representative in the UK and is also owned by Mr Denmark.

The sell-off is part of the strategy being pursued by Johnston Press’s digital-focused chief executive, Ashley Highfield, as he seeks to ease the burden of the company’s £300 million debt pile.

“The disposal of our trade and assets in the Republic of Ireland will increase our ability to focus on the growth of our business in the UK and in particular our digital initiatives, in line with our stated strategy,” said Mr Highfield.

The sale was confirmed earlier in the day by Mr Denmark while he was attending at the Limerick Person of the Year Awards as a guest of the Limerick Leader newspaper.

The Limerick Chronicle, the oldest newspaper in the country has been bought as part of the sale along with the Limerick Leader, its sister publication, which celebrates 125 years in business.

“I feel lucky and privileged to have bought the Limerick Leader. It has come back into private hands. The Limerick Chronicle is the oldest paper in Ireland and I think it is a title that is very important to what we want to do,” Mr Denmark said. “We want to get more involved in and re-engage with the communities where more investment is needed,” he added.

“It’s really important that we are not part of a corporate group. I am not trying to bring an English solution to Ireland,” Mr Denmark said. “This is Iconic Newspapers and we believe we have bought iconic brands.”

Limerick Leader editor Alan English said the deal was “a new dawn” for the title, which is celebrating 125 years of publication.