Irish television ends 2014 on a cliffhanger

TV3 soap ‘Red Rock’ is an impressive bid for viewers, but the screen battles have only just begun 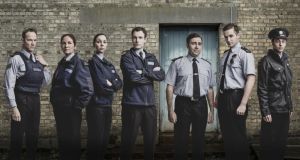 The ‘Red Rock’ gardaí from the TV3 soap opera, which will air on Wednesdays and Thursdays at 8.30pm from January 7th.

Two warring factions. Rising tensions. Fierce battles. But enough about UTV versus TV3. Is the new soap opera Red Rock (above) any good? Yes, is the short answer. The storylines that kick off TV3’s €7 million content investment are embargoed until they debut on air on January 7th, but the first two episodes, previewed to journalists, indicate that the money has been well spent.

Red Rock, which centres on two rival families and the Garda station caught in the middle, has all the hallmarks of a typical pre-watershed soap opera, with humour and high drama, conflicted characters and comic ones, and a dash of product placement courtesy of Costcutters. It is a modern affair and as good as viewers might expect from companies of the pedigree of Element Pictures and Company Pictures. TV3 needs it to be good, but more than that it needs it to work. It is all change in the Irish television come January, with British imports Coronation Street and Emmerdale off to form the backbone of UTV Ireland’s peak-time schedule from the new year.

Not everyone who watched those soaps on TV3 will follow them to UTV Ireland, but the new channel expects that anyone who tuned in more than an average of two and a half times per week will likely pick up the remote. Red Rock is just one part of TV3’s programme replacement strategy, but as the high-profile out-of-home advertising campaign promoting the soap suggests, it is an important part.

Expect plenty of three-way scheduling wars in 2015. Both TV3 and RTÉ will throw everything they’ve got against UTV Ireland in its first few days on air, then there will be some pressure on Prime Time and newbie Claire Byrne Live to fend off the current affairs challenge of UTV Live at 10. In its bid to avoid a clash with the UK soaps, Red Rock’s first episode must go up against the return of RTÉ One’s big lifestyle hit, Operation Transformation, while later in the year, there will be new shows in the mix fronted by old hands Pat Kenny (for UTV Ireland) and Ray D’Arcy (for RTÉ). Proving that the more things change, the more they stay the same, TV3 could also do well in February with the return of Blind Date, hosted by the amiable Lucy Kennedy.

Thanks to UTV Ireland’s arrival, there should be a buzz about Irish television next year as the main players compete for viewers and revenues. The big cliffhanger is whether the advertising market will be strong enough to keep all three happy.