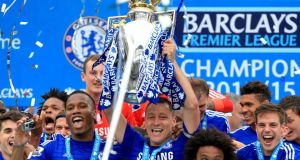 The Champions League may have been dominated by clubs from mainland Europe in recent seasons, but when it comes to money, English football has again come out on top.

With cash pouring in from broadcasters eager to air top-flight European football, overall revenue from leagues across the continent surpassed €20 billion for the first time in the 2013-14 season, according to new research from Deloitte.

England’s Premier League was the most profitable, leapfrogging the German Bundesliga to post record operating profits of £614 million, almost treble the previous record set by Germany’s highest league in 2012-13.

“The impact of the Premier League’s broadcast deal is clear to see,” said Dan Jones, partner in the sports business group at Deloitte.

He predicted that the Premier League would also overtake the Bundesliga in commercial revenue terms from next season.

Rights to top-flight football in England have been the subject of a fierce bidding war between rival broadcasters BT and Sky. In February, they spent more than £5 billion on packages of Premier League matches between 2016 and 2019. In 2012, the equivalent rights sold for £3 billion.

The impact of these rising revenues were made clear on Wednesday as the Premier League revealed £1.6 billion in payments to clubs that played last season.

Queens Park Rangers, which is majority owned by Air Asia tycoon Tony Fernandes, received £64.8 million, despite finishing bottom of the league and being relegated.

In the previous season, Manchester United made £117 million in operating profits, the highest amount ever for a football club, while Tottenham Hotspur made the largest ever pre-tax profit of £80 million, according to Deloitte.

“The change in club profitability in 2013/14 was more profound than anything we could have forecast,” said Mr Jones.

“This may move clubs from being seen as exciting and enticing trophy assets to being recognised as businesses capable of delivering consistent profits,” he added.

At a league level, the English Premier League strongly outperformed its European peers, with revenues rising 32 per cent to €3.9 billion — the Spanish, Italian and French leagues had revenues of €1.9 billion, €1.7 billion and €1.5 billion respectively.

Revenues grew 13 per cent to €2.3 billion in Germany’s Bundesliga, although the value of its broadcasting rights remained the lowest across the five leagues.

The Bundesliga has traditionally been boosted by sponsorship and commercial revenue growth, while its English counterpart has relied on evermore lucrative TV deals.

Broadcast income now accounts for 54 per cent of the Premier League’s revenue; this is the most reliant it has ever been on one income stream.

The growth in money flowing into European football has coincided with greater wage restraint, a sign of the effect of financial fair play rules, which are designed to reduce the influence of billionaire club owners keen to splash out on players.

Chelsea, owned by Russian billionaire Roman Abramovich since 2003, and Manchester City, owned by Abu Dhabi’s Sheikh Mansour bin Zayed Al Nahyan since 2008, have each received £1bn in owner investment since their takeovers, according to Deloitte.

However, in England and across Europe, the ratio of wages to total revenues has fallen as clubs have put more of their income growth towards the bottom line, and spent less of it on player wages in an effort to at least break even, as required by financial fair play rules.

The overall wage-to-revenue ratio across the five major European leagues fell to 59 per cent last season, its lowest level since the turn of the century.