‘Lousy’ ads are what happens when creativity is devalued, says ‘contrarian’ Bob Hoffman 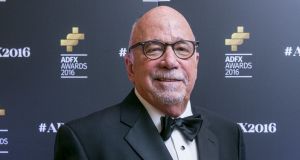 ‘Ad contrarian’ Bob Hoffman attends the ADFX 2016 Awards in the Intercontinental Hotel in Ballsbridge, where he was the guest speaker.

Advertising veteran Bob Hoffman has mastered the art of getting people’s attention. “You think you’re full of shit? I have a lifetime achievement award,” he announced to a room full of Irish advertising professionals, winning laughs from a black tie crowd settling down to a night of prizes.

“The things I say now, I didn’t say three and a half years ago when I was CEO of an agency,” says Hoffman.

The author of a blog called the Ad Contrarian spent 41 years working in the US industry, and in the latter years, he participated in what he calls the “golden age of bullshit”. Since retiring, he has enlivened industry events by talking bluntly about the “delusions” he says have afflicted his profession.

Overconfidence, and sometimes blind faith, in the merits of online advertising is chief among these delusions.

“If you go back ten or 12 years ago, we were told that people would want to interact with advertising. This has turned out to be complete fantasy,” Hoffman notes.

Social media marketing, too, has proven a festival of cringe, rooted in a “fantasy of brand love” in which consumers will jump to “join the conversation” about every two-bit product. (Share your Pyrex stories!) But “no one in their right mind” wants to engage with advertising.

“It’s delusional,” he says. The average consumer participates in hundreds of product categories, cares about four or five of these and is unlikely to ever develop feelings for the majority.

“And now Facebook is traditional paid display advertising. Big fat ads in the middle of the page. It’s not social media as we were led to believe social media would evolve.”

He describes Facebook as “one of the great bait and switch stories of all time”.

Some of these “delusions” have unwound or show signs of doing so, and he is hopeful that lessons have been learned. “I am starting to see the pendulum swinging back a little towards realism,” he says.

But what search advertising does, like the yellow pages before it, is fulfil demand, not create it.

Apple, he points out, are big spenders on traditional advertising. “They do television, they do billboards, they do magazines. It’s remarkable. Here is the most successful technology company in the world and for their advertising, they’re using almost exclusively traditional methods.”

Despite examples like these, a bias towards digital media - an undeserving one, he believes - continues to afflict the industry, he says: Changes in consumer behaviour are overstated - “television was supposed to be dead by now” - and the “magic” of social media is overplayed by those afraid to be openly sceptical.

“The one thing you don’t want to be labelled in an agency or in a marketing environment of any kind these days is a traditionalist. If you are labelled a traditionalist, better start looking for a new job, because it has become a dirty word.”

But if being a traditionalist is dangerous, being an advertising creative isn’t much easier.

One of the reasons for the “lousy” state of creativity in advertising, he says, is that “click now” online ads are a descendant of sorts of “what we used to call junk mail”, aka direct response advertising.

“The stuff that came out of the direct response side was always the lousier stuff, the crappier stuff, compared to the Madison Avenue-style brand side, but now it has been kind of normalised. And people don’t like it - they are turning it off in their millions.”

Big corporate environments prone to short-termism are “anathema to a lot of creatives”, Hoffman concludes, and with data “becoming the big obsession”, the feeling may be mutual. Creatives have been pushed down the hierarchy, their imaginative ideas about brands treated more like “a support service” than the thing of real value that agencies offer clients.

At the Institute of Advertising Practitioners in Ireland’s ADFX awards in Dublin’s InterContinental Hotel, he expanded upon the “creativity has been devalued” theme.

“True creative talent is a rare and precious thing,” the former copywriter said, and it was simply wrong to conflate doing creative jobs with the business of doing practical jobs in a creative or innovative manner. The creatives in the room, at least, were happy.

His entertaining speech was greeted with the occasional sharp intake of breath from IAPI members, but the whoops and cheers were plentiful amid the clinking of glasses. In any case, Hoffman knows exactly what he is doing.

“Strangely, I’m not out to convince anyone of anything,” he said. “But there are people within advertising agencies who think they’re crazy for thinking a certain way, and I want them to know that I’m crazy too.”