New, more subtle US brand reinventing itself to stave off declining sales 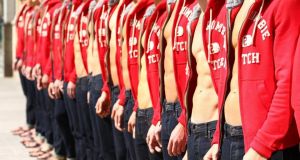 Abercrombie & Fitch: dropping its famous logo from its clothes and moving away from its signature style of all-American preppy clothes, loud branding and sexy advertising, to more fashionable contemporary lines

Show a southside Dublin twentysomething the A&F logo or Abercrombie & Fitch’s distinctive moose logo and she – or even he – is likely to go into warm memory mode, recalling those distant teenage years when the American brand’s heavily logoed casual wear was the most coveted look.

In 2008, when the brand wasn’t available here, I was in its flagship Fifth Avenue store in New York – the one with the gyrating shirtless male model with abs like a washboard (you couldn’t help but notice) as a greeter at the front door.

Inside, I was surrounded by Irish mammies flayed out on the leather Chesterfield sofas, exhausted from rifling though the piles of similar looking hoodies in the shop’s near darkness – while gorgeous sales assistants leaned against the panelled walls staring prettily into the middle distance.

Around that time too, I was passing a girl’s secondary school in one of the leafier suburbs on what must have been a “no uniform” day, and they all seemed to be wearing the same uniform – tracksuit bottoms with Abercrombie & Fitch written in big raised lettering from thigh to just above where they tucked into their Uggs, and hoodies with the brand name loud across the chest.

But now – and indeed for some time – that same twentysomethings wouldn’t be seen dead in logoed Abercrombie, and more importantly for the brand, neither, most likely, would his or her younger sibling.

Powerhouse brands such as H&M, Forever 21, Zara and TopShop, which offer ever-changing, bang-on-trend clothes and without any obvious branding, have colonised what were Abercombie & Fitch’s core customers. These high-street labels are simply cool, and current and while as mass produced as anything that came with the A&F logo, the clothes seem edgier, with much more individual style.

Looking at what’s been happening in this fickle, though strong spending market, it’s not surprising that last year the company announced it was dropping its famous logo from its clothes and moving away from its signature style of all-American preppy clothes, loud branding and sexy advertising, to more fashionable contemporary lines.

It also beefed up its marketing spend, as revealed in its latest set of figures released last month, from $111 million to $119.8 million. Those same figures – for Q2 2015 – showed that sales dropped by 8 per cent year-on-year to $818 million, although as that loss represented the slowest decline in four quarters it is being seen by market analysts as a positive and a sign that maybe the turnaround has begun.

Hollister, the company’s little sister brand – slightly cheaper, less self consciously preppy, more inclined to nod to passing fashion – fared better with sales falling just 1 per cent in the second quarter of 2015. Analysts had expected a bigger, 4.7 per cent decline, according to research firm Consensus Metrix.

In August, Abercrombie & Fitch posted its new autumn collection on Instagram and it shows a very different direction: one look featured a model in ripped skinny jeans, a check shirt and a leather biker jacket, another model wore a simple long grey sleeveless knit dress. Another picture showed a rack of classic white shirts. The clothes, without a hint of branding in sight, could be from, well, from anywhere.

And that’s going to be the challenge for Abercrombie & Fitch. For years it had pretty much the same look across its preppy offering, one year’s mid-blue logo-emblazoned hoodie not being too different from the sky-blue hoodie with the same dominant logo from the year before. And it had a ready audience prepared to buy into the brand’s image and its relatively high prices.

In marketing terms there was a brand proposition that everyone could understand and which was relatively easy to communicate clearly.

Now it has to make its clothes covetable, and crucially, different from those other retailers that have proven themselves expert at mid-priced “fast fashion”. It’s a massive task and nothing in that autumn collection suggests the brand has got it right – yet.

Though that could change soon. It has finally filled a long-vacant position in the company, head of women’s design at Abercrombie & Fitch. Kristina Szasz, most recently design director for denim at both Tommy Hilfiger and Karl Lagerfeld, takes up the position this month. There’s also good news on the corporate image front. In the past, the company made headlines for its shocking employment practices – notably a class action suit which highlighted hiring practices which discriminated on the basis of looks. Last month it got positive coverage for agreeing to end the use of zero-hour contracts or what’s known in the US as “call-in” shifts in its New York stores.