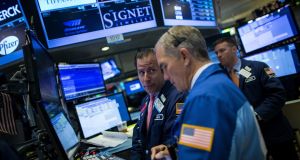 Traders on the floor of the New York Stock Exchange. Microsoft and Morgan Stanley were the latest US companies whose quarterly results topped analysts estimates Photograph: Eric Thayer/Bloomberg

Upbeat company earnings lifted US and European stock prices on Wednesday, with the Dow and Standard & Poor’s 500 setting record highs, while the dollar reached a four-month peak on bets the US Federal Reserve may raise interest rates by year-end.

The impressive run in major equity markets around the globe led investors to reduce their safe-haven positions in US and German government debt, sending their yields higher.

Oil prices fell to a two-month low before US data that may signal whether a supply glut in the top consuming country was easing.

“For the rally to sustain we are going to need to see continued improvement in the earnings and economic activity,” said Peter Cardillo, chief market economist at First Standard Financial in New York.

Microsoft and Morgan Stanley were the latest US companies whose quarterly results topped analysts estimates.

While most global stock markets post gains, investors scaled back their holdings of low-yielding government bonds, with US and German yields near their highest levels since Britain’s vote to leave the European Union on June 23rd.

In currency trading, the dollar rose to its strongest levels in four months against a basket of currencies as lofty stock prices and the recent string of encouraging economic data revived wagers the Fed would raise interest rates later this year.

A stronger greenback partly weighed down oil prices with US crude futures falling a two-month low ahead of domestic data on energy inventories at 10:30 am (1430 GMT).

1 Irish people like nothing more than being bribed with their own money
2 Climate apathy in Northern Ireland could impact on the Republic
3 Ministers ditch Davos for electorate’s doorsteps
4 The Irish economy is thriving but if you’re not feeling it – here’s why
5 Pointy sale: How a Google reject built a $160m company and sold it to Google
6 Hogan warns Britain on US trade deal as EU set to impose tariffs
7 Fast-growing frozen food group has a strong appetite for success
8 Business leaders see better public services as key election issue
9 Barclays to cut 100 senior roles as lender seeks to rein in costs
10 Coveney launches inaugural Italian Irish Chamber of Commerce
Real news has value SUBSCRIBE