Turmoil in markets takes toll on global IPOs in 2015 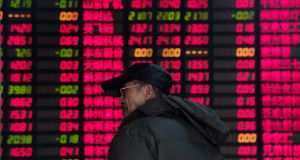 Gyrating stock markets and Silicon Valley’s growing preference for staying in private ownership led to a sharp drop in global listings in 2015.

Total proceeds from new listings fell nearly 30 per cent from $264 billion (€243 billion) in 2014 to $194 billion, as a strong first half fizzled in the second half of 2015 amid fears about the ripple effects of a slowdown in China.

A bright spot came from privatisations of state-owned companies, as the triple offering of Japan Post’s bank, insurance and holding companies helped propel the Asia-Pacific region to a 43 per cent share of global floats.

Europe, the Middle East and Africa came second on the back of governments selling off the Dutch bank ABN Amro and Italy’s post office. The Americas lagged behind with just one of its initial public offerings, from US payments processor First Data, ranking among the year’s largest.

None of them approached Alibaba’s record $25 billion IPO in 2014, which helped make that year one of the top five years dating back two decades. And market conditions, including falling oil prices, proved to be a further drag.

“Most of what the Street hoped to bring to market in September, October and November was postponed to 2016.”

Among the expected US deals that did not come off were grocer Albertsons, retailer Neiman Marcus and Denis O’Brien’s telecoms group Digicel, and bankers had never expected a marquee tech deal like Twitter or Facebook.

There is optimism for a rise in the global issuance tally in 2016, bolstered by parts of Asia and Europe. The US outlook, however, is less rosy after lacklustre IPO numbers this year. But tech deals are a wild card. If private funding for start-ups dries up, more so-called unicorns – jargon for private tech companies that claim valuations of $1 billion or more – will go to the public markets.

So far, the latest crop of tech darlings, including Uber and Airbnb, have remained steadfastly private, finding billions of dollars at attractive valuations without having to go public. In 2015, the number of US tech listings was the smallest since the aftermath of the financial crisis in 2009.

All told, US-listed IPO issuance was the weakest it has been since 2009.

In Europe, the first quarter was the busiest on record, according to some measures, as market difficulties at the end of 2014 pushed deals into 2015 and the European Central Bank’s programme of quantitative easing drove equity prices to new highs.

But this was followed by a quieter summer as markets debated whether the Greek government would accept the terms of a bailout deal, and European markets were also hit by August’s volatility.

“When you look at total proceeds in Europe we’re up 15 per cent and the only reason we’re up is because we had five stonkingly large IPOs in the fourth quarter,” says Vivienne Maclachlan, director of capital markets at PwC.

1 Boeing identifies new software flaw in grounded 737 Max
2 ‘Life in Vilnius reminds me of Ireland in the 1990s’
3 Construction body calls for loan scheme to help first-time buyers
4 Real price of cheap credit? Unaffordable homes
5 GoMo is being investigated by advertising authority
6 Whiskey a go go: sales top $1bn in US
7 Dublin housebuilder records €11m gain after striking deal with bankers
8 Big Phil battles to repair transatlantic links
9 Irish people like nothing more than being bribed with their own money
10 ‘We stuck our heads in the sand for a long time’
Real news has value SUBSCRIBE