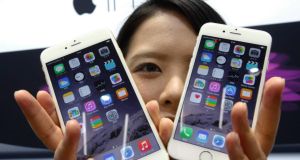 Apple has halted online sales in Russia -- just three weeks after boosting the price of an iPhone 6 by about 25 per cent to 39,990 rubles. The value of that iPhone sale when converted into dollars already has plummeted to about $585 from $847. (Photograph: Shizuo Kambayashi)

As one of 144 million Russian consumers that companies from Apple to Renault are trying to reach, university professor Elena Grekhnyova is feeling the pinch of a currency in crisis. She’s now spending 1,200 rubles every few days for eggs, dairy products, poultry and vegetables to feed her family, up 20 percent from just weeks ago. “It’s getting surreal -- will it ever stop falling?” Grekhnyova, who teaches in the central Russian city of Kursk, said of the ruble. “It may turn out that I won’t be able to buy a new coat, a $50 smartphone or jewelry.”

Grekhnyova’s frustration shows the challenge facing foreign companies doing business in Russia after a financial panic sent the currency to a record low and fanned concerns its leaders might limit the flow of capital out of the country. The meltdown follows a collapse in oil prices and US and European sanctions against President Vladimir Putin’s regime.

Companies are raising prices seeking to offset the drop in the value of the sales they make in rubles. While no companies are showing signs of pulling out of Russia, Apple on December 16th halted online sales there -- just three weeks after boosting the price of an iPhone 6 by about 25 per cent to 39,990 rubles. The value of that iPhone sale when converted into dollars already has plummeted to about $585 from $847.

The same has happened to other companies trying to keep pace. On December 3rd, McDonald’s raised the price of a Big Mac by 2.2 per cent to about 94 rubles -- only to see the value of that sale plunge to about $1.35 from $1.77 in the intervening days.

Since mid-November, Renault and partner Nissan Motor Co. have lifted prices by 8 per cent on cars made by their AvtoVAZ operation in Russia.

The situation is likely to worsen before improving, said Sarah Boumphrey, head of strategic, economic and consumer insight for research firm Euromonitor International in London. Consumers will be “forced to make tough purchasing choices as the prices of many products continue to rise steeply,” Boumphrey said.

“Russia is too big a market to be ignored, but plans for increasing investment for must surely be on hold.”

The rouble yesterday sank beyond 80 per dollar, a record low, before rebounding after Economy Minister Alexei Ulyukayev denied the government would turn to impose restrictions to stop Russians from converting money into dollars. Apple yesterday said it was halting online sales in Russia due to “extreme” ruble fluctuations. Boosting Prices Other companies are joining Cupertino, California-based Apple and Oak Brook, Illinois-based McDonald’s in adjusting their prices.

Grekhnyova, the Kursk professor, said she and her friends have developed a kind of fatalism about the ruble’s plight. “When I heard that the rouble has fallen again, my colleagues and I started laughing out loud,” she said. “I still don’t know what happens next year to my salary and prices.”

In some cases, there will be fewer stores, or at least smaller ones, to serve her and other consumers in Russia. Inditex SA, the world’s largest clothing retailer, this month closed its flagship Zara store in Moscow’s Tverskaya street retail district. German retailer MediaMarkt, whose warehouse-sized electronics stores were a novelty and a competitive advantage when it entered Russia in 2006, now finds that size has become a problem.

“We are reducing selling space at a number of stores,” Anna Trofimova, a Moscow-based MediaMarkt spokeswoman said.

Renault and Nissan are more exposed to Russia than any other carmaker after gaining control in June of OAO AvtoVAZ, the maker of Lada cars. Combined, the group controls 31 percent of the Russian car market and is targeting 40 per cent by 2016. Sales for the Renault, Nissan and Lada brands fell 8.4 per cent through the first 11 months of 2014, beating the market’s 12 per cent drop. They’ve raised prices by 8 per cent since mid- November and remain committed to the market. “There’s no change in our strategy,” Oxana Nazarova, a Renault spokeswoman in Moscow, said by phone. “We look at the situation every day to see how we can react.”

7 Stocktake: US stock market is an ‘epic bubble’

9 How MBA students have adapted amid the Covid-19 pandemic